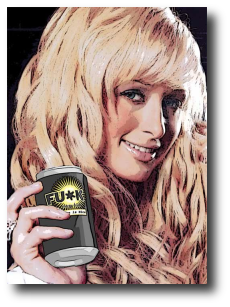 Holy crap! I thought I might get some great can designs, because, well, not to boast, but my readers tend to be smart, talented, and exceptionally good-looking. I’m sure you’ve noticed this. But still: holy crap! I am getting some great designs here. It is only a matter of time before Coke or Pepsi blatantly rip these off and launch them as new products. And a special mention to Lucia Suarez for coming up with the brilliant “Kinetic Beverage.” You know in two years they’ll all be called that.

Lots of people emailed me questions about how to enter, so let me answer some of those here: you should get your entry in this week. A web-friendly JPEG is ideal for submission, but hang on to your high-res original, which we’ll need if you win. And yes, the product’s name is “Fu*k,” asterisk and all.

Next week I’ll create a gallery of all entries, for the film producers to peruse. You’ll be able to do that, too. If you submitted a design but don’t want me to post it or put your name on it, please let me know.

Update 2: Congratulations Mat! Chosen as the best submission from an excellent bunch. When the cans get mocked up, I’ll post a pic. Thanks again to everyone who worked on a design.

Make Mine a Fukk

The Syrup film producers want to mock up some cans of Fukk. I think they are hatching some kind of promotion. They asked if I had a design in mind, and I said not really, but I bet if I mentioned it on my web site, somebody would come up with something good.

So here we are. If you invent a graphic design the producers like, they’ll mail you some of the mocked-up cans, and I’ll send you an autographed book, and the next time we’re all in a limo with Natalie Portman and she says, “I don’t wanna go home! Where can we party?”, we’ll suggest your place. Although that last one has never happened yet, so I wouldn’t count on it. Still: cans and book.

I’m thinking you may not need to be particularly fancy on this one, because understated is cool. But whatever you think. If you want to enter, email me.

I’ve been working on a Syrup screenplay for a while now. Longer than I like to think about, really. Anyway, there’s a bit I’m using from the book where our hero, Scat, is trying to come up with a brilliant new idea for a Coke TV ad, and instead has a bad one:

I have started to wonder about the beach: about variations on a giant inflatable beach ball. I am thinking about this ball rolling through a major American city, with people running and screaming.

It’s the kind of idea that is stupid yet oddly attractive. I have lots of those. So, apparently does Pepsi.

Now come on. That’s Scat’s stupid idea. The only difference is it’s Pepsi instead of Coke, and people having fun instead of being crushed to death. And that change, frankly, was disappointing. I really thought I was about to see some mayhem.

(Thanks to Jake for the heads-up. So to speak.)

A reader named Richard e-mailed me about the new energy drink “Cocaine.” He did this when it was still quite topical, but I’ve been falling behind on my e-mail again, so I only just found out. In a few weeks time I’m planning to find out how those mid-term elections are shaping up.

Anyway, my thought today isn’t about Cocaine specifically, because everything about that product turns out to be exactly as you’d expect:

The complaints, of course, were that the product glamorizes and legitimizes the illegal drug cocaine. Just as obviously, the manufacturers were shocked that anyone could imply there was some kind of connection between the drug cocaine and their product, Cocaine. They wrote:

Well, we think that kids today are neither ignorant, nor uninformed. As a matter of fact, we think that you are the brightest and most informed generation in the history of the world. How else would you be able to navigate your way to our MySpace?

I was intrigued by how impressed these guys are with their customers. I mean, they really think they’re clever. That seemed like an odd conclusion to reach about people who buy sodas just because they have a funny name. And it occurred to me that whenever I hear a company telling their customers how smart they are, it seems they’re selling a stupid product.

Take cigarettes. I’m not saying you have to be stupid to smoke. But it certainly helps if you have a poorly developed ability to anticipate logical consequences. Yet it’s hard to find an industry more deeply moved by their customers’ intellectual powers than tobacco. If you ask Altria,* smokers aren’t just customers, they’re proud warriors for freedom of choice, fighting against nanny-government interference in our personal lives. In fact, you probably don’t realize it, but many people smoke even though they hate it, just to express their refusal to bow to the military-industrial complex.

Similar, sometimes companies implore you to “make up your own mind.” Their argument seems to be that if you’re smart, you’ll ignore the overwhelming body of evidence that says their product is dangerous, and instead reach an independent conclusion based on their promotional web site.

To test the apparent correlation between how smart companies tell you they think you are and how stupid their product is, I plugged the phrase “our customers are intelligent” into Google and noted the top product categories to come up. If companies tended to say that because they really did have smart customers, you might expect to see telescopes and pocket protectors. If, on the other hand, companies tended to tell their customers they were smart as a piece of transparent marketing, you might see:

…which is what came up. That seems about right to me: two products that are sold for an order of magnitude more than they cost to manufacture, a service that offers the exact same thing as two thousand other companies, and a web site design company that claims, “When Microsoft begged us to help them with their website we were far too busy with other projects and had to turn them down.” Although, to be fair, companies offering domain name hosting and web site design come up no matter what you put into Google. They’re just part of the landscape, like insects, or Paris Hilton.

(* “Altria” used to be called Phillip Morris. According to its web site, the company changed its name “to better clarify its identity as the owner of food and tobacco companies that manage some of the world’s most successful brands.” That’s good to know. I’d thought they did it just so people wouldn’t realize they were the same pack of lying, murderous bastards.)

In my novel Syrup, the hero comes up with an idea for a new cola called “Fukk,” which comes in a jet black can. He sells the concept to Coca-Cola (well, kind of), and the company releases it.

I’m hoping there will be a Syrup movie in the not-too-distant future, but Coke is making me nervous by releasing products that are increasingly like Fukk. The latest is “Blak.” It’s a black bottle, not a can, but still: I’m becoming convinced that their plan is to creep toward a Fukk-like product, then sue me for stealing their idea.

Incidentally, I visited the Blak web site and noticed it has a “Spread the Word” section. Coke is clearly excited about this, because if you visit any of the other sections, you see a big link back to “Spread the Word.” It turns out that Spreading the Word is sending e-mails to your friends to tell them about Coca-Cola Blak. I would be very interested to know if the number of people who use this facility is greater than zero.

Update: They do sell it in a black can! Aaargh!