My fifth novel, Lexicon, is out today in the US & Canada, so I’m going to spend some of today visiting New York bookstores, looking at it, and feeling weird. The early press on this book has been kind of shockingly good, like what you dream about as an author but never actually happens, so I’m daring to think that THIS COULD BE IT, the book that allows me to use the word “bestselling” without abusing its definition. Poor word. It has been so stretched.

But a few days ago I finally watched Syrup and I need to tell you what that was like! I’ve been building this up for about five years and then I did one tweet, so people have been asking HEY WHAT DID YOU THINK OF THE FILM. But I was traveling and not sleeping and didn’t get the opportunity. Now I’m writing this from a New York hotel room at 3:30am, so I’m making my own opportunity, like Tony Robbins. 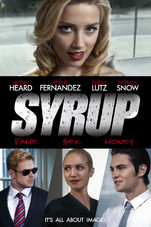 I had been holding out to see Syrup in a theater, since that was what I’d always dreamed about. But then I realized I had a problem, because I could only see it in a theater in the US, and my wife, Jen, wouldn’t be there. Jen was a huge part of writing Syrup; she read the first draft one chapter at a time and got all excited about it in a highly motivating and sexy way that made me keep writing. Plus she’s an awesome person to see a movie with. But we could only get a DVD in Australia, not see a theater showing.

So I made an executive decision: The night before I hopped a plane (Melbourne to Sydney to Los Angeles to Houston to Columbus all in one 32-hour Friday), Jen and I dragged the sofa up to the TV and closed the curtains, so it would be like a real theater. We were both nervous and held hands and said things like, “Whatever it’s like, it doesn’t change the book.”

I have trouble summarizing my reaction because I reacted in pieces. I would see a scene and think, “Oh! I wrote this one!” or “Wait that is different!” and I didn’t process it at all like a normal person watching a movie. It was all about individual scenes. But my first thoughts were:

“Oh no this is too confusing.” The first time I watched it, I was a little shocked at how little setup there was, especially at the start, and thought no-one would understand what was going on. Everything moved so fast. But I’ve since seen it again (in a theater in Columbus with an actual live audience, and ohhh, how amazing to watch it like a proper movie), and I felt this far less. I think my initial reaction was a novelist kind of thing; films can move faster and the audience still picks up the gist of what’s happening.

“This looks really good.” The visuals of the movie are really strong. I knew the filmmakers were very big on this, and had an experienced and highly skilled cinematographer in Julio Macat, but boy does that show. Every shot is beautiful and interesting.

“This scene I wrote is awesome!” My favorite parts, for completely selfish reasons, were scenes that played out just like I’d written them in some screenplay draft or other. And then they were on the screen! Some I loved because they were just like I’d imagined (6 making Scat breakfast, Scat shaking a dummy), and seeing them come to life was thrilling; some were awesome because they took my material in unexpected directions, elevating the scene beyond what I’d expected (the monologues, ZephCo’s corporate goons—which Josh Pais and Christopher Evan Welch play hilariously well).

I thought this must mean that I am an amazing screenwriter, but later the director showed me some deleted scenes, which included lots of stuff that played out just like I’d written and was really horrible, so I realized the truth was they just kept my good parts. The rest, which turned out to suck when filmed, were quietly executed. So that’s lucky for me.

“Amber Heard is amazing.” Holy crap. Amber Heard is amazing. I was always worried about how 6 would turn out, but Amber annihilated that character. In a good way. My favorite part of the whole movie is her monologue about marketing love; I think that’s perfect. I love Shiloh, too, and many many others, but Amber is amazing. You should make a note so that when everyone else catches on you can be all like, “I actually preferred her earlier work in Syrup.”

“How did they do all this?” I’ve thought this before, when I was on set, but I keep re-thinking it. Novels are easy compared to films. Novels, I just sit there and type and things happen. Films require people to painstakingly create every detail that winds up on screen. It’s so practical. They have to wrestle the real world into submission. They have to make decisions based on trade-offs and logistics. And it’s so easy to forget because the end result looks effortless.

“OMG ending.” I’d heard they changed the ending. I’m not going to say how, because, you know, spoilers. But I had written a particular kind of ending in pretty much every screenplay draft, and then the film went and did something completely different. And it’s better! I saw my original ending as a deleted scene and boy did it suck. It sucked a lot. The new one is actually thought-provoking and makes you want to go back and rewrite some screenplays. That may just be me. But I love the ending.

Overall, I think the film is very true to the book, not just in its tone and characters but in how they are both kind of raw and and messy but steam ahead powered by earnest, youthful enthusiasm, never worrying about whether they’re being too ridiculous. The film is an indie and if that was a thing for books, the book would be, too. They are a good match. As an author, that’s what you want your film adaptation to be. Well, also super successful. But most of all, you want it to be true. This film is true.

How To Watch Syrup: So it turns out the movie is only playing in a super-limited number of theaters and will mostly be an iTunes/On Demand/DVD kind of thing. At which it’s doing well; it’s been sitting in the Top 100 Movie Rentals charts for a month (currently #52), and wrestling with three or four others for the #1 Indie spot. Thank you so much if you had something to do with making that happen. It makes a massive difference to the people who sweated and toiled for months or years on this, doing unspeakable things in the name of making a good film. Outside the US, I still don’t know; I keep hearing there will be some kind of release in most major international markets, but all I know for sure is Australia gets it in November.

Just downloaded Lexicon via Kindle for my tablet! (Alas, since you are not coming to the Bay Area for a signing, figured I'd get the e-version...:).

I watched Syrup the weekend it was released on iTunes and really liked it. The beginning threw me off just because I wasn't sure what to expect and had the book as a frame of reference but I did get into it. I think all the changes worked and I like that the movie is kind of its own thing, separate from the book.

i think the most confusing bit was understanding what they were doing with the numbered cans. I eventually figured it out but it still left me with questions (like you can only do that kind of thing once, and how do you maintain from a life cycle management perspective)--- I know it's just a movie, but I thought his creative brilliance would be a litlt more obviously brilliant.

the final conversation in the diner was also a little disjointed. I really liked the final scene in that it left me feeling thoughtful and superior.


Overall great movie though. I'm glad I can say I read the book nearly 15 years ago.

Random trivia: this is not the first time she played a character with a number as name. In "Zombieland" she played '406'.

I love your blog, so I have nominated you for the Very Inspiring Blogger Award :)

I look forward to watching Syrup!!

I just finished reading Lexicon (I got it on the Kindle too). It was more awesome than I thought it would be! I was expecting another satirical marketing-oriented book but instead got an action thriller! Dan Brown has nothing on you :)

The plot line reminded me of a movie I watched called "PontyPool" but this is way better. I loved the amount of work you put into creating this world - it actually felt like I was in this world since this is how I consume my news anyway - bits and pieces from different blogs/discussion boards/ etc. Really well done!

Now to get around to watching Syrup - my "downloaded copy" alas didn't work, but it seems I can get it from iTunes so I will be trying that next.

Location: Morristown, Indiana
Quote: "Why do I blog? Simple, because Max Barry blogs."
Posted: 3507 days ago

WHERE DID THESE 20+ BILLION PEOPLE COME FROM??

So, I still have my nation on Nationstates (The Robot). But, I haven't really answered many issues in several years. You see, nationstates allows for "vacation mode" which is code for "I only have to log in every 60 days to keep my account from being deleted". So every approximately 60 days I get an email that my nation is on the brink of extinction, and I log in.

Anyways, I just realized I have over 20 billion people. Where did they all come from? I guess I should pay more attention to this. I wrote a factbook for fun once about the Robot Panda. It's mildly hilarious to me.

Also, isn't it about time you add a "Movie" section to your blog?