My local delivery guy is very impressed with my parcels. When he comes to deliver a box, he says, “It’s from New York,” his eyes filled with awe, as if New York is a magical, mythical place, floating above the rest of the world on the back of a giant turtle and inhabited by knights and princesses, none of whom send packages. And this guy is an international courier. He must be exhausted when he gets home at nights, after reading all those thrilling exotic addresses.

But my latest box was exciting, because it had some foreign editions of Jennifer Government fresh off the presses from Spain and Brazil. The Spanish one was especially cool, because I didn’t know it was being published there. But, unless this is some kind of elaborate hoax, I guess it is.

Foreign editions usually come as a surprise to me, because the chain of people required to pass along the news is longer than two, which I’ve worked out tends to be the practical limit. For example, I discovered that there’s a truly amazing Swedish edition courtesy of site member Kalle, who posted the details in the comments here. Kalle was even better than my publisher would have been, supplying a translation of the blurb:

Jennifer Staten is a hard and breathtakingly funny thriller. The government agent Jennifer is struggling against baby-sitter problems in the same time as she has too save the world from aggressive marketing methods like torture, mass murder and strategic nukes… A satire from the wonderful world of the big companies, not too unlike from our own…

The 32-year old bestseller author Max Barry is probably the worst that has happened to the big companies since Michael Moore.

He is definitely the best that has happened too SF-satire since George Orwell.

They say “definitely,” so you know it’s true. Unlike the references to torture and strategic nukes, which I’m pretty sure aren’t in any book I ever wrote. That’s a pretty interesting way to entice readers: advertise parts of it that don’t exist. I don’t know if that’s a sound way to build repeat readers. I’m also curious about their apparent targeting of people who are smart enough to know George Orwell, but gullible enough to believe I’m the best writer in 50 years. And as for that cover… well, at least that would seem to guarantee that very few people will be getting to the end of Jennifer Staten only to wonder, “Hey, where were the tactical nukes?”

I also found out about a forthcoming Chinese version from the translator, a guy called Wayne Fan. I (eventually) wrote back to thank him for letting me know, and then, because I couldn’t resist, said:

I’ve always wanted my books to be translated by a Fan. (Boom boom.)

Thought you are too busy to return my Fan mails.

Nice. Should be a good edition, then. 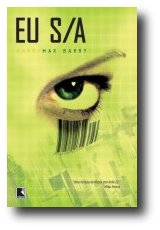 Speaking of covers (no word on what the new Company looks like yet), apparently the Brazillian version of Jennifer Government is soon to hit the shelves, and they’ve tweaked the design.

The title translates as something like, “Me, Inc.”, which I am hoping sounds much less lame in the original Portuguese. They also made the disclaimer look like a Windows XP error dialog box, although I don’t know why. And if you squint, you can see business suit-clad legs behind it. It’s louco!

Max on the Air

This is what they should do with all my radio interviews: take the small number of clear, semi-intelligent things I say, dump everything else, and mix them up with some boppy background music. Australia’s SBS radio has condensed 40 minutes of me rambling on about Jennifer Government, corporations, and culture into a quick, breezy audio piece you can download from their website (or here).

My least favorite part is when I read from the book. I’m really bad at that. I should hire that guy who does the audio version to come around with me; I could stand there and nod approvingly while he reads. That would be cool.

after visiting Nationstates.net i decided to read your book, Jennifer Government. While reading, I read something which made me think: “What would you get if you scanned the barcode?” Is it simply a random arrangement of numbers, or does it have meaning?

Well, A Jennifer Government Fan, that’s a good question. The answer is long, convoluted, and filled with heartbreak. Well, no, not really. It’s just long and convoluted.

First, the barcode on the book’s cover doesn’t match the one in the story. That is, while Jennifer Government in the novel has a barcode tattoo for a particular product—which nobody is going to give away in the comments here, lest I smite their account—the barcode under Jen’s eye on the cover is for the book itself. More specifically, it’s for the US hardcover edition.

Or so I was told at the time. The truth, I was to discover, ran deeper.

During cover design, I didn’t care much whether the barcode matched up to what was in the book, partly because I had very little say in it, partly because I was so grateful to get a cover that didn’t suck balls I was weeping with joy, and partly because who the hell would ever know? But upon hearing what Doubleday wanted to do, I thought, “That’s cool. You could take the book up to the counter and buy it by scanning the front.”

I went around telling people this, until about a year later a guy with more knowledge of barcodes than is really healthy, Todd Larason, wrote an exposé on the Jennifer Government cover. It’s a very interesting piece, if you’re me or unhealthily fascinated by barcodes. Here’s a taste:

“But wait!”, I hear you cry, “You said it’s an EAN-13, not an ISBN, and as everyone knows they have incompatible checksum digits!”

Todd uncovered the non-match between the story and the cover, and that was just his warm-up. He also discovered that while the barcode digits on the covers of many editions of Jennifer Government are for the US hardback, one of the few that doesn’t match is… the US hardback. For some reason, in a last-minute change, the barcode number on its front cover was altered: instead of ending in a 2 (like here), it ends in a 3 (like here). This means it matches the book’s ISBN, but not its barcode.

Why? It’s a mystery. I can only presume that somebody thought they were catching a typo just before the print run.

Todd Larason wasn’t done there. His final observation was that according to the official EAN-13 standard, the barcode’s bars don’t match its numbers—nor the ISBN, nor anything else. It’s not actually a valid barcode. It’s just funky-looking black lines.

(P.S. If you’re interested in seeing how the cover evolved, take a look at the Jennifer Government Extras.)

A riot outside a shoe store as customers fight each other for limited-edition Nike sneakers worth $1,000 a pair? Who’d a thunk it?