Max Barry is the author of six novels and the creator of the popular online game NationStates. He also once found a sock full of pennies. He lives in Melbourne, Australia, with his wife and two daughters. Sometimes he coaches kids' netball.

The only rule of writing I’ve ever found that always works: a story gets better with an unopened box.

Love me some glitch hop. 🎶 🎧😍 twitter.com/alexsavageomfg…

“I just p3wned ur city:” that thing where a hacker can take over everything is becoming possible. blog.acolyer.org/2017/06/22/iot…

You better not mess with “the advertisers.” They’ll boot you right off the damn air. You don’t breathe without the advertisers’ say so, son.

Crazy thought, have you ever considered banging out books Heinlein style? One draft, then DONE. Launch it and go to the next, and the next, and the next. Get 10 books done in the time of 1. if 50% of people don’t love it, you are still 5x better off than 100% liking that x10 draft work. And honestly? I bet 80% of the people will STILL love your work. The only person stopping you is that unfair critic glaring from your mirror. Tell him to piss off and let you write!

Yet another aspiring writer

I appreciate the support, Y.A.A.W. Thank you. But I have to say, I would rather set myself on fire. First, I think you’re being very optimistic about how many people would like the pieces of crap I produce as early drafts. You may think otherwise, but remember, I’ve seen them and you haven’t.

Second, and I offer this by way of explanation, not as excuse, I like messing around with stories by myself. That’s super fun. Showing them to people is the worst part, because they stop existing as beautiful imaginative creatures full of wonder and possibility, and turn into chunks of paper with plot holes and unclear character motivations that need a lot of work. I like publishing books, and I agree I should do it more often, but it’s just so tempting to sit and write drafts instead.

They’re okay. I don’t dislike them. Me and peanuts have nothing to say to one another.

Hey Max, have you noticed that the Swiss company “Allevia” has been liquidated and no longer exists? re: “Allevia: So Sue Me (Dec 2006)”.

I did not know that! Huh. I guess I showed them. I mean, I’m not trying to take credit for bringing down the company. But, you know, they tangled with me, and now I’m here and they’re not. So I basically brought down the company.

Could you write a Multi Ending Book? One that allows the reader to make choices as they read. With a range of unique outcomes.

Which stance did you take? Trump or Hillary? Or moderate?

I am perfectly moderate and the rest of the world is extreme, like everyone thinks. I think Hillary would have been a good President. You would have gotten sensible, incremental improvement with Hillary. She would have finished with historical low approval ratings because a lot of people were super aggravated by her very existence and would have beaten the drum until it drowned her out of office, but still.

Trump, on the other hand, was the kind of person I thought the US would elect in about twenty years, right before Fahrenheit 451-style parlor walls and the Apocalypse. Years ago I regularly watched The Apprentice, and each episode a team would go into the boardroom to face Donald, who would quiz them on their performance and then invent a completely unrelated reason why one person was to be fired. The logic never held from one episode to the next, so one week being cautious might get you fired and the next it would win praise. So in that sense, it was a useful allegory for the randomness and cult of personality of the business world. But also it made clear that Trump is basically a collection of amoral pathological psychoses tuned for self-aggrandizement. Which is not ideal in a President.

I do wonder if there’s a more evil version of Trump, though. Because Trump isn’t very calculating. A lot of the time, his main objective seems to be to feel important. Also often he seems to believe what he says and then just doesn’t want to admit he was wrong later. So I wonder if you can take that bluster and shameless populism and set it in someone with more self-awareness, who does it on purpose. That would be pretty evil. Maybe Trump opens the door for that kind of person.

On the plus side, though, it’s been a fantastic six months for journalism. Not long ago, everyone hated the media and journalists were hopelessly compromised click-bait merchants in a dying industry. Now they’re saving democracy. I mean, they’re also hopelessly compromised click-bait merchants, but as an institution, the media has been a real credit to the nation. I think there’s a lot to be proud of there.

See, a more evil Trump would have wedged the media with patriotism, rather than attacking them directly. You attack the media head-on, you’re injecting adrenaline directly into the veins of everyone who ever thought they might like to be a journalist. You go to war, you get attacked, then the media has to shut up and support the troops. That’s what Evil Trump would do.

Australians in total need to reevaluate their leaders.

Do you ever write funny short stories and then sit in the corner of your bedroom giggling to yourself?

Not short stories. But with novel scenes, and in my study, when I’m rereading. When I’m actually writing, I’m staring at the screen with an expression like your psychotic ex-boyfriend peering through your bedroom window. There is no giggling at that point. But reading it back, I try to put myself in the headspace of someone who’s reading it for the first time, and if I do that successfully, then yes, I do admit, I sometimes giggle and guffaw at the wit of the fellow who wrote these words, whoever he is.

John Clarke was a hero of mine. I met him once completely by chance on the banks of the Yarra. I’m shocked and sad he’s gone.

New Pepsi ad brilliantly deconstructs feeling of joining a cause only to discover its not what you thought and everyone is terrible. 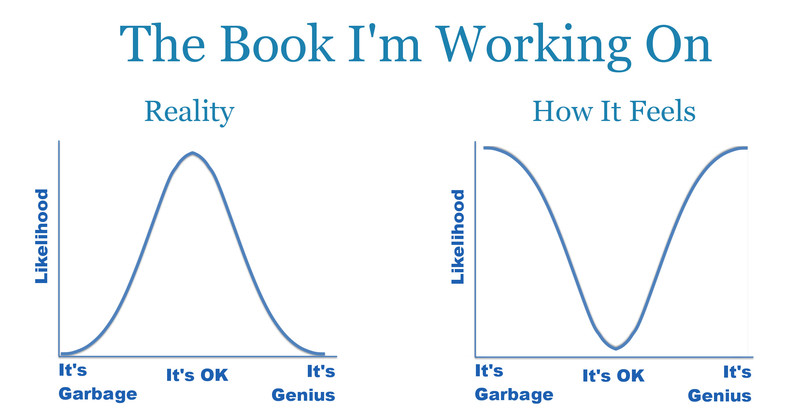 I’m not finished with the new book until I’m ashamed of the old one.

Spotted in the Wild

My favorite thing to happen this year: 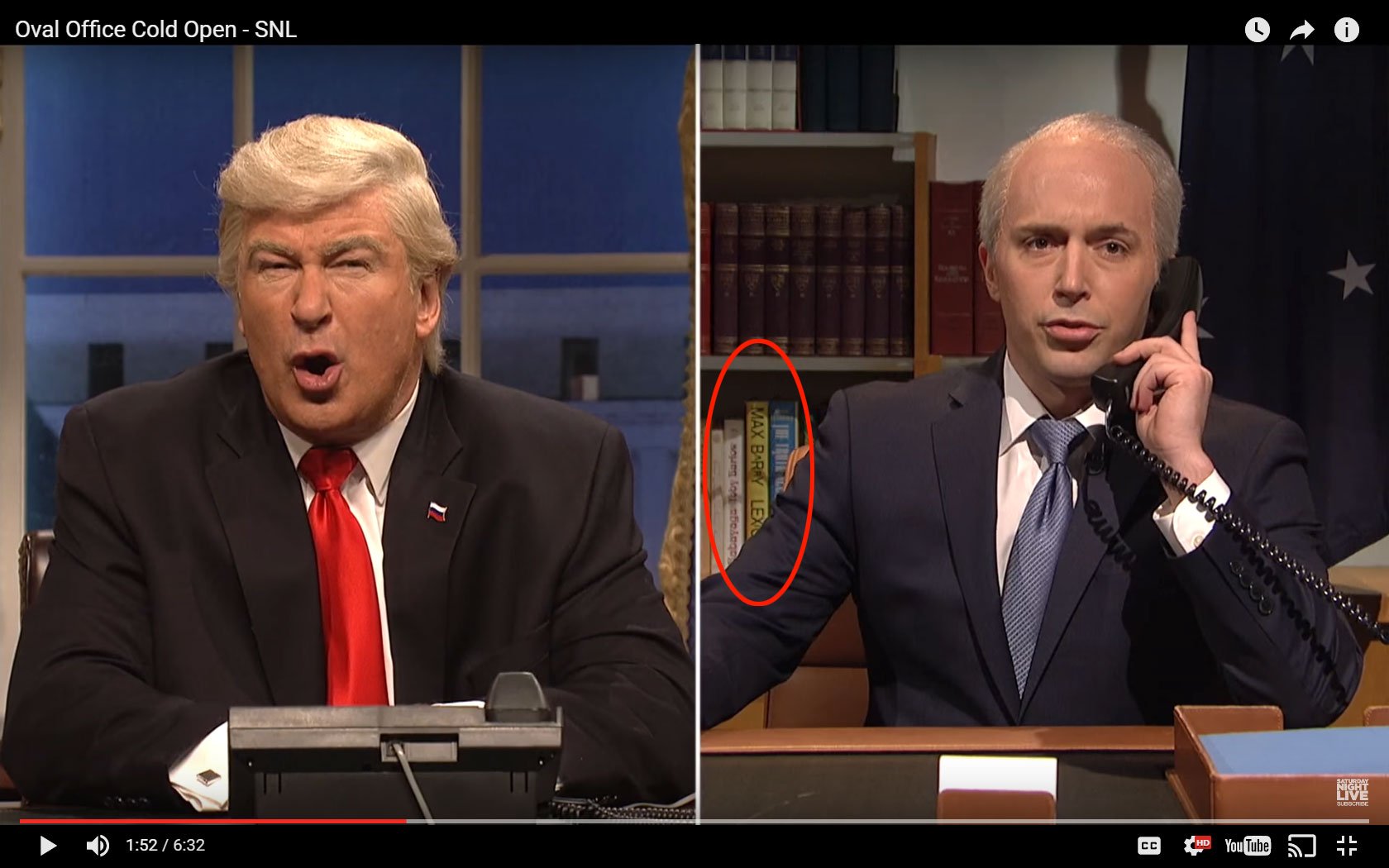 I prefer to call alternative facts by their real name, “novels.”

Happy New Year everyone! Except you, Owen.

Huh, I’ve done 1,999 tweets. I should make my next one extra specOH GODDAMN IT

Audio: I Should Buy Some Cement

A 6-minute radio adaptation of a short story I wrote a few years back, thanks to Greg R. Barron.

Greg just noticed it on my site and decided to make an audio version, which is pretty great.

0 comments | MaxBarry.com › Writing › Audio: I Should Buy Some Cement

A 6-minute radio adaptation of a short story I wrote a few years back, thanks to Greg R. Barron. youtube.com/watch?v=ErRd5R…

When My Next Book Is Out

Might we have a new book from you by the end of 2017? I’m jonesing for some new material. I guess I’ll go back through and re-read your old books again.

But 2018 looks good! I’ve been working on multiple books and now they’re all getting close to finished. So one of those should be ready to go. I don’t know which one, though. Sometimes I feel like a book is on track and then I realize it’s horrible and I should burn it and feel bad and go work on something else. Then, a little while later, I realize that other book needs to be burned, and the first one is actually all right. It’s not a linear process, is what I’m saying.

This has been a really great year for me creatively. One of my best. It will take a while before that becomes apparent to anyone else. But I’ve enjoyed it a lot. I still don’t really know where good words comes from or why but I’m grateful for the ones that found me this year.

2 comments | MaxBarry.com › Writing › When My Next Book Is Out