I wrote an audiobook full of lies

In high school, I was on the debate team. I was third speaker, the last one, whose job is to listen to the opposing side’s arguments, then stand up and make them sound stupid. It’s intense, because you go in without much of a prepared speech, and while others are talking, you’re furiously scribbling down ideas for counters.

This was where I discovered you can learn to get better at persuading people. That was a new idea to me, because previously I thought people made up their minds based on facts. Sure, you can lie, but that’s just making up facts; facts are still involved. The new idea was that facts were a jumping-off point: People could also be persuaded by how confidently I spoke, or whether I connected my argument to some other thing they already liked or disliked.

Since then, there has been a wild explosion of disinformation. A lot of persuasion techniques I’d only ever seen used in small, niche ways, mostly because they were so shameless, came right out into the open. I don’t want to get into who was doing what, but there has been so much persuasion going on, it’s hard to tell what’s real. Which is the exciting thing about persuasion: When it really gets going, it can dig into your soul and uproot everything.

So anyway I wrote a comedy about disinformation getting out of control. It’s an audiobook and you can listen to it right now: 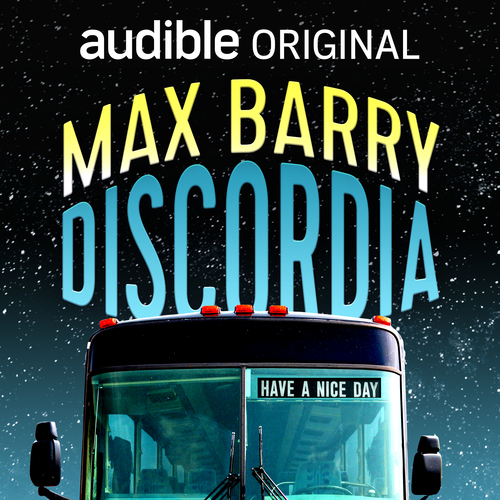 He’s a part-time gardener and car thief. She’s a murderous nun on a holy mission of vengeance. Together, they might be able to save the world.

The unearthing of a mysterious box (with HE LIES etched across the lid) precipitates the arrival of a compelling stranger prophesying that the world will end in two weeks. Simultaneously, the government locks down for war. The enemy is… unclear. They may even be us. One thing’s for sure: Diego can’t trust anyone anymore. He can only trust himself.

This is an Audible Original, so you can listen for free as a subscriber, or sign up for a free trial and still listen to it for free! Or you can just buy it. That’s also an option.

2 comments | MaxBarry.com › Discordia › I wrote an audiobook full of lies

Hey Max, is there any plan to have a text / ebook / Kindle version for those of us who prefer reading?

Reading? In this day and age?

No plans for a print version, sorry.