On Tuesday I had my Syrup cameo. I was not as nervous about this as I’d expected, until it came time to do it, at which point I was seized with terror. This was because everyone around me seemed to know exactly what they were doing and be very good at doing it, while I’m a writer who can’t act. I knew that whenever something went wrong during a shot, people would shout out, “RESET, RESET,” or “CUT” or “MAX BARRY GODDAMMIT HOW HARD IS IT TO TAKE ONE STEP TO YOUR RIGHT” (probably), and did not want to waste everyone’s time. They were doing such an incredible job; why was I making it harder? My very presence was an insult, implying that anyone could do this. If an actor wanted to insert a few sentences into a novel I was writing, how would I feel about that? Like no freaking way was that happening, that’s how.

So I felt indulgent. But of course every person I spoke to was completely encouraging and happy for me, so it may have been all in my head. Anyway, I completely nailed the “neurotic” part of actor right off the bat.

I was a waiter. In an earlier blog I said I was going to be an exec in a strip club—which I really should have mentioned to my wife before the day I was leaving, I discovered—but the schedule changed so instead I was a waiter. I had a line but convinced the director to drop it, because I lost confidence in being able to make recognizable sounds out of my talking hole. Instead I mostly just stood next to Amber Heard and gave her things while she delivered a monologue about feminism in the workplace. This was a good match of roles to talents. I was like the caddy of a great golfer, if the golfer was world-class and beautiful and at one point wearing a corset, and the caddy had never held a club before and was concentrating on not swallowing his own tongue.

Here’s me paying intent attention to the director, Aram: 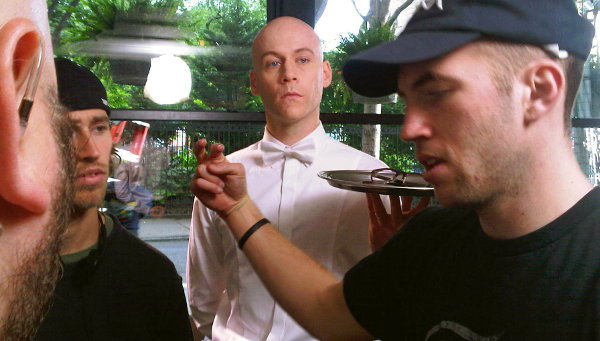 Beside me is Shane, a very cool guy who I talked to a lot on set; he’s a producer who in this moment is standing in for Amber. I must be standing on a box or something because no way is Shane this short. That’s some kind of film trickery. The ear belongs to Scott, whose job is to herd people into the right positions at the right time by bellowing instructions. He is awesome. Everyone is awesome. Julio Macat, the cinematographer, who I wish I got a pic with but never did, is flat-out brilliant and a genuinely lovely human being. Every day I was on set I learned more about what these people do and how good they are at doing it. 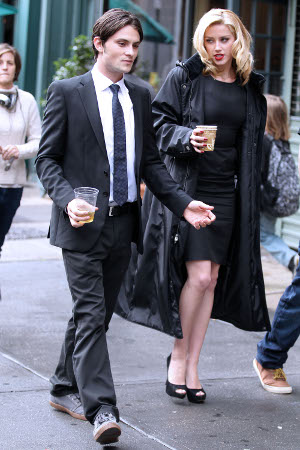 A lot of exterior shots were filmed that day and next, so the internet filled with paparazzi pics. I think I am supposed to be disappointed at, you know, these vultures suckling at the teat of celebrity, but come on, HOW COOL DO THESE LOOK.

No-one felt a need to take a paparazzi shots of me, for some reason. I had to do it myself. So here is me in my trailer on the day of my cameo. (I don’t know why I got a trailer.)

Then I flew home to Melbourne, Australia. Which was heartbreaking, because I want to live on that film set for the rest of my life, but also wonderful, because I got to hold my girls (three new teeth for Matilda. Three!) and sleep for longer than five hours and get back to writing things.

This trip was amongst the most hands-down incredible things I’ve ever experienced. It was astonishing on many levels: hearing actors delivering lines I wrote, seeing characters and locations I’d imagined coming to life, being embraced so warmly by the cast and crew, watching how films actually get made, surviving a cameo. I’m so grateful to every person involved. And I know nothing will ever beat it: that even if I’m fortunate enough to have more work produced, it won’t be like this first time, where reality smashed through the ceiling of my expectations and kept heading up. I went over there fully prepared to be disappointed, at least in some respects. And I was wrong. This is going to be a good movie.

So, in this movie, is Pepsi actually involved, or did the studio have to make up a fake soda company for it?

So super excitied for you Max! Great to hear you're home. Can't wait to see the finished product. Congrats again!

Location: Iowa
Quote: "Never judge a book by its movie."
Posted: 4178 days ago

This has been so fun to hear about. So excited for you and to see the movie! Looks awesome!

Hooray!!! I'm getting pretty pumped for this one to come out in theaters :D

Location: scenic monterey, ca
Quote: ""The rest is not our business.""
Posted: 4178 days ago

sooo can't wait for the movie.

it's such a pleasure to read your happiness :-)

can't wait to see it

Great, now Max is a film star. He'll never talk to us again!

Location: Peterborough, Canada
Quote: "If it ain't broke you're not trying hard enough."
Posted: 4178 days ago

Okay, I haven't read Syrup yet (I know, boo! hiss!) but it's the only book of yours I haven't read yet. The question is, should I read it first or wait for the movie? Movies are never as good as the books, it seems, no matter how hard they try.

What do you think Max? Based on what you saw. Read book first or wait for the movie (and then read the book afterward)?

Of course, if anybody else wants to comment, I wouldn't mind. :)

Location: Ravena, NY
Quote: "I could write a book about being lazy. I just don't feel like it."
Posted: 4178 days ago

An extra with a trailer? Time for an IMDB profile Max!

Location: Pittsburgh, Pennsylvania
Quote: "God whispers to us in our pleasures, speaks in our conscience, but shouts in our pains: it is His megaphone to rouse a deaf world."
Posted: 4177 days ago

Well if you thought it was good, I'm sure I will, too.

Thanks so much for sharing these events Max. It is as close as any of us will get to this unique experience. Your joy is palpable. Please keep sharing. Btw, when is "Company" going to be made into a film? That's the one that I am casting in my mind. Unfortunately, in my moments of casting reverie, many of the stars I think of are displaced by people I work with, who keep popping up in their place. It's like "Tales of Corporate Oppression" has hijacked my happy place. Arghhh!

Damn, Amber is looking smokin' in that image.

I'm thinking you look like some kind of super villain in that photo.

Location: Olathe, KS
Quote: ""Every day we must persevere. For we are engaged in a severe contest between intelligence, which presses forward, and an unworthy, timid ignorance obstructing our progress."Adapted from the masthead of "The Economist""
Posted: 4170 days ago

Meeting expectation is rare. The mind judges hard. Parents (in hindsight) wife, and son only ever exceeded mine.

What great moments, and I fully understand in the rush who a little thing like the strip club manager role could have been forgot to have been mentioned. Good luck with that.

Location: United States
Quote: "It is far wiser to keep your mouth closed and be thought a fool, then to open it, and remove all doubt. -Abraham Lincoln"
Posted: 4118 days ago