I’m seriously losing the battle to Facebook and Twitter. It’s just so easy to post stuff there. I hardly even need to think about it. For a blog I actually have to spend time composing my thoughts. I know that’s not really evident, but I do.

As a result, I have accumulated a COMPENDIUM OF NEWS, each item of which failed to inspire a blog all by itself, but which nevertheless requires mention. So buckle in, sparky.

There was a teaser, now there’s a trailer! Those are different, trust me.

The film is out June 6, 2013 in the US. But there’s something called a “sneak on demand” on May 2nd, which I think is some kind of Internet thing? I don’t know. Will it be viable outside the US? I don’t know! But I’m excited!

I think that’s my shoulder at 1:10. I’m not sure. I didn’t think I was wearing a jacket. But I was definitely standing behind Amber Heard while she made sexy at the camera and no-one else was around. Don’t tell me I imagined that. It happened.

My fifth novel, Lexicon, comes out June 18 in the US & Canada and a few days later in the UK, Australia, South Africa, and New Zealand. I’m not promising this is the novel that will finally allow you to talk about me without the other person saying, “Who?”, but the early signs are good. There’s a big print run lined up, early reviews are very positive, and awesome people are saying awesome things:

“About as close you can get to the perfect cerebral thriller: searingly smart, ridiculously funny, and fast as hell.” —Lev Grossman, New York Times bestselling author of ‘The Magicians’

“Lexicon grabbed me with the opening lines, and never let go. An absolutely thrilling story, featuring an array of compelling characters in an eerily credible parallel society, punctuated by bouts of laugh-out-loud humor.” —Chris Pavone, New York Times Bestselling author of ‘The Expats’

“I don’t know how you could craft a better weekend read than this novel of international intrigue and weaponized Chomskian linguistics. It’s the perfect mix of philosophical play and shotgun-inflected chase scenes. Like someone let Grant Morrison loose on the Bourne identity franchise.” —Austin Grossman, author of ‘Soon I Will be Invincible’ and ‘You’

“Dazzling and spectacularly inventive. A novel that jams itself sideways into your brain and stays there.” —Mike Carey, author of ‘Hellblazer’ and ‘Lucifer’

And there’s this Amazon.com review I really like and this one and this from bitethebook.com and a soon-to-be-released starred review from Kirkus.

Also film rights to Lexicon have been optioned by Matthew Vaughn, director of a slew of incredible movies including Kick-Ass 1 & 2, X-Men: First Class, Startdust, and Layer Cake. Did I mention this already? I don’t think I did. Anyway, I think we’ve been down this road often enough to realize that “optioned” doesn’t mean “there will definitely be a film.” But it does mean there might be. And I think Matthew’s record of turning optioned properties into films is running at around 90%. That’s what he told me, anyway. So that could happen.

Melbourne, Australia: I’ll be launching Lexicon at an Embiggen Books event on the day of Aussie publication (Tuesday 25th June). They have a Countdown Timer running so you can always know exactly how many seconds you have to wait.

USA: So this is kind of awkward, because I have a film and a book coming out a few weeks apart and I live a really long way away. I mean, it’s the good kind of awkward. It’s the kind of problem you like to have. But at this stage it’s looking like I’ll be in the US for early June, either in LA or New York, but won’t come back for a whole tour. I’m thinking I might do some kind of pre-release thing in whichever city I visit, where I read from the new book and then leave you all frustrated and unable to purchase a copy.

UK & elsewhere: Sorry, you need to make me a lot more famous, to justify those air fares.

Do you want a Jennifer Government wallpaper? Of course you do! You’re not crazy! 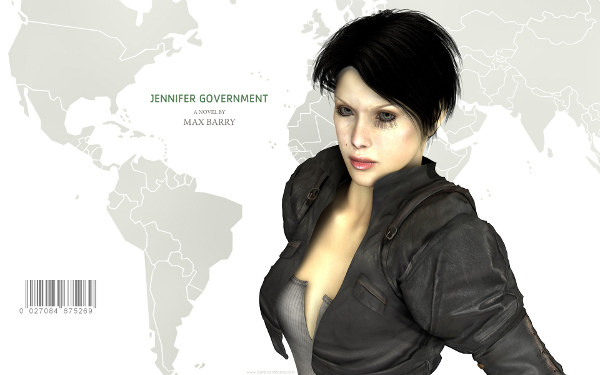 Digital artist Mark Hirst decided to do these for no particular reason and kindly made them available in several sizes.

Also these days Jennifer Government is looking less like a film and more like a TV series. Just FYI.

Look at this Korean Machine Man cover. There’s a flamingo on it. Are there flamingos in the novel? No! Not that I recall. But there it is. The back of the cover has a whale and a stag as well. 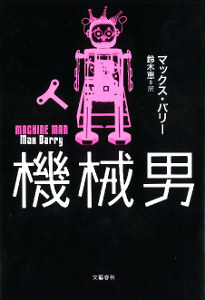 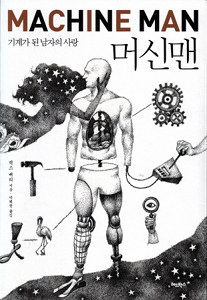 On the right is the Japanese cover, which I think is super cool. That comes out on May 10. I say this knowing full well that not a single person will think, “Oh, that’s good to know. I’m an English-speaking Max Barry fan living in Japan right now.” But still.

Also that Machine Man film is still ticking along. You might have thought that since there has been nothing announced for a year or two, that dream was gone. But no! FYI.

Quote: "The Straight-Jacket makes it hard to type."
Posted: 3517 days ago

Is the Jennifer Government TV show looking like a network, cable, or premium cable show?

I take back all the whining I did back in 2006. See you at Embiggen in June!

Location: Sydney, Australia
Quote: "Why are the pretty ones always insane?"
Posted: 3517 days ago

The hard decisions. Should I pay to see a movie in which Amber Heard makes sexy at the camera or should I save my shekels for a novel involving "weaponized Chomskian linguistics"?

Okay, so I'll do both. But, if there was a movie in which Amber Heard made weaponized Chomskian linguistics sexy I'd totally watch it!

Nice update Max and the trailer is just electric! This is absolutely the first time I've seen a trailer for a movie that uses the phrase "from the cult novel" and it's a book I actually read. This could change my reading habits dramatically.

Btw, it's entirely possible that an English-speaking person fluent in Japanese reading this blog also wants to read your book in Japanese.

Wow, all this time and then all this news in your face at once. Nicely played, Max!

Very much looking forward to the new novel and Jennifer Gov't TV show. Hopefully nobody in real life feels inspired by the initial events of that book - I have always wondered if similar (but less extreme) events have taken place already.

Seriously looking forward to all this stuff. Lexicon sounds like a great summer read.

And back when I read Jennifer Government, I wrote you a heart-felt email where I totally predicted the TV show version. Though I may have said mini-series. You created such a great world in that book, and seems perfect for that kind of medium.

Congrats on all this great news.

You've been compared to Grant Morrison. I'm not sure whether you should be flattered or insulted. :P

Is Aronofsky still set to develop and direct Machine Man? how long until you get popular enough that i can quit loaning out my Max(x) Barry books to people?

Is there going to be some awesome promotion for Lexicon, a la Nation States or Tales of Corporate Oppression? (Also, was there any cool website for Syrup?)

Damn it! My birthday is june 17! :( advance the aussie release date for me? :p

Location: Ravena, NY
Quote: "I could write a book about being lazy. I just don't feel like it."
Posted: 3516 days ago

Question: was Syrup always a romance? I don't seem to remember the romance playing that big a part in the novel. But then, it's been several years. I should probably get it out and read it again.

Speaking of not updating the site; I need you to update your 'bookshelf' section. I've read everything on the list and need more recommendations.

Location: Morristown, Indiana
Quote: "Why do I blog? Simple, because Max Barry blogs."
Posted: 3509 days ago

I don't write a blog...unless Max writes a blog. So here it goes.

First, this is the first time I've ever typed the word "compendium". I'm still not sure what it means.

Second, I make bow ties now. It was one of those ideas I told my wife before we went to sleep, and she replied, "You are an idiot. Goodnight." ...the next day I found sewing machine off Craiglist. And now it exists. Speicher Tie Company. And I've sold some to Australians, so I'm pretty sure it's the best thing since Vegemite.

Third, the reviews of Lexicon are worthless unless they are my own because the only opinion that matters is my own. Feel free to mail me an advanced reading copy.

Fourth, did you know Narwhals really exist? It seems made up, but it's not. There really is a unicorn of the sea. It's pretty much the best news I've heard since I learned Ligers really exist.

Fifth, I grew a beard. I didn't think I could do it, but I did. Now I will proceed to shave it and never grow one again...years in the future I will say, "Remember that one time I grew a beard? ...and it was an okay beard."

Iâ€™m an English-speaking Max Barry fan living in Japan right now. Very excited. So you will sell at least... one book in Japan. I'm sure your publisher will be reassured.