My US Book Tour is Canceled :(

Well this is a bummer. The book tour is off: I will no longer be touring the US for Providence in April.

So as fun and dangerously sexy as it would have been to travel from American city to city, meeting people in flagrant violation of government medical advice, it’s not going to happen. I’m really sorry for everyone who had already made plans. Let’s try this again in 2021.

You can still buy the book, though. And you should. I recommend pre-ordering now, so you have something to read while you’re self-isolating. It’s perfect, because when reality is this bizarre, you need to go to that next level for a decent hit of escapism, and Providence has space battles with aliens that spit out black holes.

Take care, wash your hands, look after each other.

10 comments | MaxBarry.com › Providence › My US Book Tour is Canceled :(

Short version: It’s still on, as far as I know, but the situation is evolving, so who knows.

I remain totally willing to fly to the US and get infected if that’s what it takes. Book tours are great fun, and I don’t want to miss one just because the world is in the grip of a major pandemic. I will come to America and shake hands with anyone who lets me. And you know I’m virus-free because this will be the first time I’ve left the house in years.

But as I write this, the US has closed its borders to Europe, and Tom Hanks has tested positive for coronavirus in Australia. Which aren’t great signs. If this were a movie, and in the early scenes Tom Hanks was coughing weakly into a handkerchief, I’d feel pretty certain that before long a large number of people would be dead. I just hope that number doesn’t include Tom Hanks. The moment Tom Hanks keels over, I’m barricading myself indoors with tinned food and a shotgun.

So for now: tour is on. I believe in you, Tom. You can get through this.

What are the chances of you adding more cities to your book tour?

Zero, I’m sorry to say. I have to point out that I don’t get to choose my own tour. It’s organized by a publisher who has to try to extract some kind of value from my time that exceeds what I’m going to order from hotel room service. Also they have to find bookstores that want to host me on the exact date that works with my schedule. So it’s harder than it seems.

Will you be blogging the book tour, like you did a long time ago?

I think I will acknowledge that the world has moved on from blogs and use some kind of social media instead. I’ll have my daughter with me this time, so instead of cooling my heels alone during my down-time, I’ll probably be exposing her to the wonders of the United States, like how power points don’t have switches on them.

How many of your books is too many to bring to one of your readings?

I’m treating this as a serious question because I know sometimes people have strange ideas about what might be considered rude at book readings. For example, people have apologized for asking me for a photo. In reality, I love being asked for a photo. That makes me feel super famous. I mean, I’m not Chris Hemsworth here. I understand that if you ask Chris for a photo, sure, that’s probably the thirtieth time he’s been asked that day. But I only get to do this occasionally. I will stand for photos all day long.

Why did you choose to create Nationstates?

I’ve come to realize that I didn’t choose to create NationStates. NationStates chose me as a vessel to bring itself into the world. But at the time, I just thought it would be fun, and help to promote my novels, and not consume my life. Two of those things turned out to be true.

I cannot create nation on nation states, and I’ve never played it, and no one has ever played it on my network, so I’m having a hard time understanding why it refuses to let me do anything. I’m even blocked from sending help requests since someone in my neighborhood spammed it.

Yes, this can happen: You can get IP banned from NationStates even though you are a perfectly lovely person who never hurt anyone. That’s because we’re not yet at that point in the future where everyone is required to prove their identity before being allowed online. I mean, obviously that future is coming. Google and Facebook already know who you are at all times. I signed up for Instagram a while ago, not because I planned to post anything, but just to follow my kid’s school, and even though I didn’t tell anyone and didn’t connect it to anything, within 24 hours I had friend requests from everyone I’d ever met. I think Facebook fingerprinted me and then told all my friends.

Anyway, what I’m getting at is that NationStates, which is not Facebook, can’t be sure who you are. We have to guess based on the data we have, like where you’re connecting from. So if there’s someone we want to keep off the site, because they’re a terrible person, you might get caught up just because you look similar.

Obviously this isn’t great. The general idea is to let people into the site, not keep them out. But sometimes it’s important to keep them out, because they’re terrible, and in that case, I would rather accidentally block some good people for a while.

I’m a big fan of NationStates, I’ve just been wondering… How was your day?

It was great, thanks! I finished another book recently, so I’m feeling super productive and proud of myself. I have exercised the dog. I posted an app online to generate efficient netball rosters using a genetic algorithm. Everything is pretty swell.

Coronavirus Update #1 (March 13): This is now looking super shaky. Powell’s has officially canceled and there may be more to come. Please check newer posts and/or my Twitter for updates. 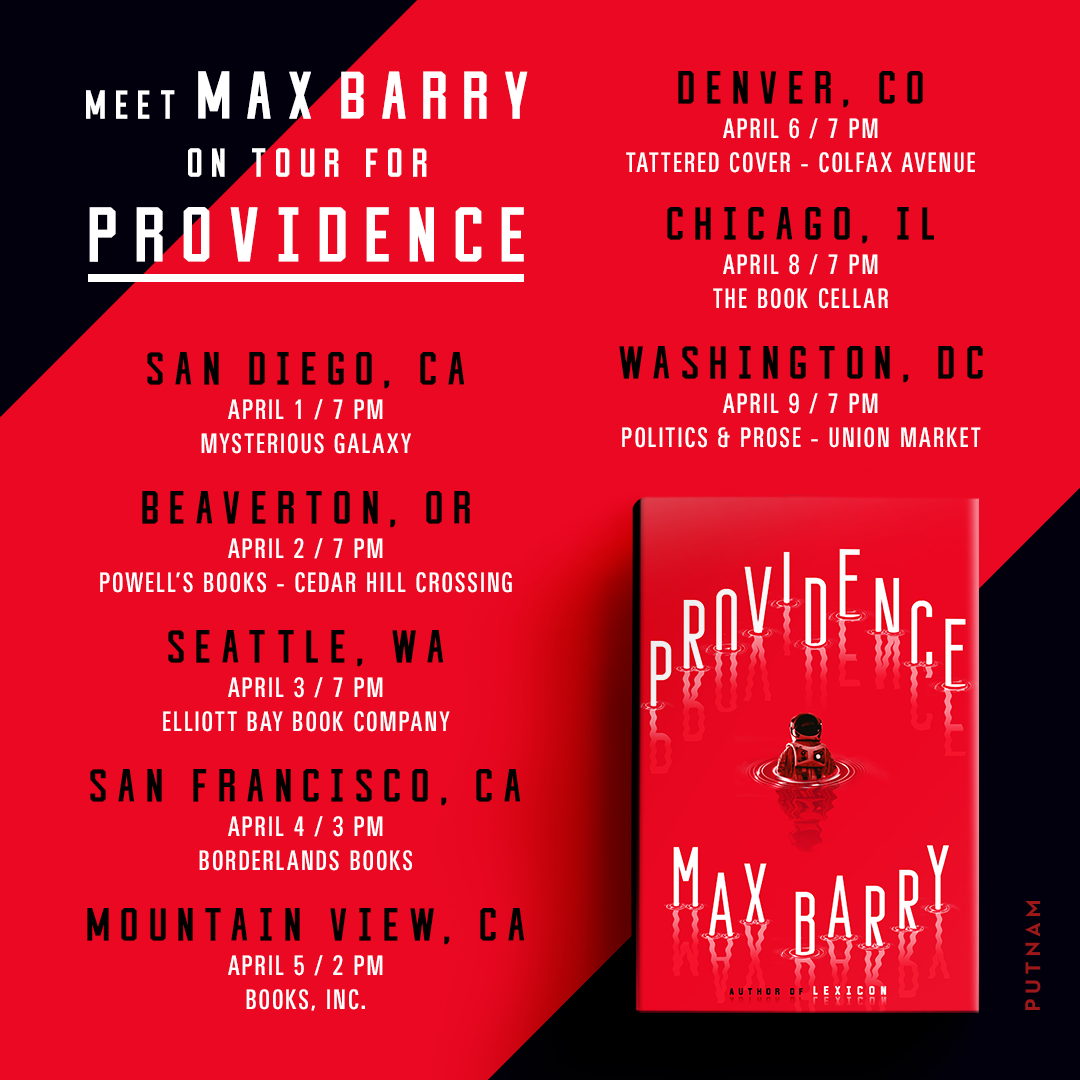 A lot has happened since I was last in the US. The world became a dark dystopia ruled by corrupt oligarchies. Data-driven marketing companies sucked up our fears and turned them into products. The book publishing industry fell into crisis.

Ha ha! I’m kidding. It was all like that already.

If you’ve never seen me in person, boy, are you missing out. I mean, the accent alone, you can’t even imagine. So what happens at these things is first I talk about whatever’s on my mind. I’ll be traveling with my daughter this time, so, you know, brace yourself for some insights on what it’s like to take a 14-year-old Australian around the US on book tour.

Then I read from the new book a little. But not for long, because, really, you can read it yourself. That’s why we printed all these copies.

Then comes my favorite part, where people ask questions about whatever. Writing, NationStates, why Australian Rules Football is the greatest sport in the world: you name it. This is really the bread and butter of the bookstore event for me. Any kind of situation where people will sit and listen to my opinion on things, that really works for me.

I also sign books. The new book, older books, you name it. I will sign anything not nailed down. Although if all you want is a signed Providence, you can contact one of the bookstores and we’ll arrange that without you having to leave home. I mean, that’s not my preference. But I want you to know that option is available.

I Updated My Site

Well, I finally did it. I updated my web site. It sounds so simple when I put it like that. Let me tell you, it wasn’t. It was not simple. I’ve been tinkering with this website since 1998 and each time I just slather more code on top of the old stuff. How it still works is a miracle.

The problem with doing this, instead of biting the bullet and making something new and modern from scratch, is that it becomes increasingly difficult to do anything without causing weird side-effects, like when you try to move a jigsaw puzzle, or colonize the Americas. It’s a real house of cards at this point.

But I had to update it, because the previous site was built around a photo of me from 2007, and it was feeling more and more like deceptive advertising. I mean, I wouldn’t be the first author to use an old picture. There’s one guy, I don’t want to name names, because I thought it was Tony Ross but then when I went to check maybe I was misremembering, he looks mid-thirties in his author photo, but in reality, he was born in the mid-thirties. I know this kind of thing does happen.

And I doubt anyone has been buying novels because of the vibrant youthful beauty of the author—in my case, I mean. I am guessing no. But either way, it was just too dated. It was a nice photo but I want people to be able to recognize me at book readings. So here we are.