Any time I need cheering up, I check out my web stats to see what people were searching for when they visited my site. Most search terms are sensible enough, like “jennifer government”, but then there’s a long list of ones that… aren’t so much. These are funny for two reasons: first, that—quite by accident—these words do actually appear on one of my web pages, and secondly, imagining the look of disappointment on these people’s faces when they end up here instead of a page of, for example, “naked people telling the news”.

Here are my favorite maxbarry.com search terms from the past few months:

There’s an especially long list of search terms involving Mary-Kate and Ashley Olsen, just because I wrote that one bit about them. Most of these are as distasteful as you’d imagine, but others are… well, take a look:

Then there are two that are distasteful, but too bizarre to pass up:

There are plenty of people looking for naked pictures of Mary-Kate and Ashley, but this first guy went to the special effort of specifying that they be naked without bras. Clever. Then someone was apparently interested in whether the Olsen twins had ever engaged in hanky-panky with a character I made up. You know that line between fantasy and reality? Right, exactly: you do. This guy doesn’t.

2 comments | MaxBarry.com › Max › Looking for something? 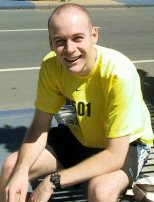 I know you’re dying to know whether I made it around that 10km/6mi course without medical assistance, so: yes! This pic is of me just after the race, and if you’re wondering about that smile on my face, it’s due to the endorphins—I declined to test the benefits of Vaseline. My time was 1 hour 1 minute and 19 seconds, which I was very happy with; so happy, in fact, that as soon as I’d attained it, I tried to faint. But a table was kind enough to catch me and then I realized it would be a good idea to drink some water.

I’m kind of addicted to running now, but a little worried about whether it’ll get in the way of my writing. For the last few years I’ve had a routine of falling out of bed and into my chair in the study, where I start typing more or less whatever’s in my head. This has worked better than you might expect, so I’m leery of postponing that crucial time when I start thinking about stories. But a run first thing in the morning helps me, too.

Today I decided to try something new. I got up, turned on my computer, and read over the last page or so of Company, which is what I’m currently working on. Once the scene was fresh in my mind, I laced up my shoes and headed out the door. I live on top of a hill, and have been advised that if I run down hills my knees will explode on my 40th birthday, so I did a fast walk for six or seven minutes, mulling over the novel. It was all working nicely: I was having some good thoughts, and still getting my exercise.

Then I reached the bottom of the hill and started to run. I took two steps and looked down. I wasn’t wearing my sneakers. I was wearing my casual shoes.

I’m doing an online interview this Saturday/Sunday, so if you want to ask/demand/accuse me of something without waiting 20 weeks for a response via e-mail, now’s your chance. It’s run by the NationStates moderators, but open to anyone who can figure out IRC. If that’s you, I’ll be in the #nationstates channel on irc.esper.net this weekend; for the time where you live, here’s the World Clock. And if you’re wondering what it’ll be like, the answer is this.

Speaking of interviews, there’s a new one with me up at piedriver.com. I did this about 6 months ago, but the guy only recently gotten around to posting it, so my answers are new and surprising even to me.