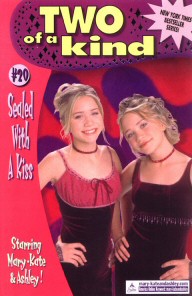 Last night I took a break from re-reading Cryptonomicon to pick up a book roughly as long as one of its paragraphs: Sealed With a Kiss, by Mary-Kate and Ashley Olsen. It was number 20 in a series, so at first I wasn’t sure if I would be able to follow the story-line without having read the previous 19, but luckily these fears turned out to be unfounded. It was a cracking read, full of hope and joy and heart-breaking pathos, so I’m sharing it with you.

Mary-Kate and Ashley can’t wait to go home for winter break. But they wind up stuck in a Harrington University dorm instead.

You see why I was intrigued. The book’s first sentence alone raised a series of perplexing questions:

First, who, exactly, reads the 20th book in the Mary-Kate and Ashley series without realizing they’re sisters? I mean, setting aside the possibility that the previous 19 books have been keeping this a secret, and that the reader has thus far been unexposed to mainstream media, the book’s cover shot is of two remarkably similar-looking girls. Isn’t that a giveaway? If you’re worried about readers that stupid, you probably need to point out that they’re twins, too.

Second, I can’t help but wonder what percentage of Mary-Kate and Ashley books contain an exclamation point in the first sentence. I haven’t checked, but I get the feeling it’s a high number.

Third, and most intriguing: Mary-Kate Burke. The authors of this book—and it says so on the cover, so it must be true—are Mary-Kate and Ashley Olsen. I’d thought this was some kind of tell-all autobiography, but apparently not. It turns out that Mary-Kate and Ashley books feature characters called Mary-Kate and Ashley that look exactly like them but are, in fact, fictional. I hope you get that, because I had to stop and think about it for a while. Whenever I came across passages like this:

“Why can’t you just get another flight, Cheryl?” Ashley asked.

“On what—Santa’s sleigh?” Cheryl grumbled. “It’s the holidays. All the flights are already booked.”

I thought, “Well, just send your private jet, Ashley!” Then I had to remind myself that fictional Ashley doesn’t have a jet. People complain that movies and computer games blur the line between fantasy and reality; I say, start with Mary-Kate and Ashley. After reading this book, I’m no longer sure if they even exist. I mean, think about it: first there was just one of them, on that TV show Full House, then they split into twins; now, apparently, they have divided again, into the Olsens and Burkes. They’re actually spinning themselves off. Either that or they’re some kind of mutant virus, and unless we do something, there will soon be eight of them, then 16, then they’ll destroy mankind.

But back to the book. It quickly became apparent that Ashley was the more entertaining twin, getting all the good lines:

“Wait!” Ashley cried out. “I forgot to pack my bathing suit and flip-flops!”

“Bathing suit?” Mary-Kate shrieked. “But the winters in Chicago are ice-cold!”

“There are indoor pools,” Ashley said.

Snap! Good work. The book really started to move along when the twins’ Chicago holiday plans were dashed and they were forced to move into a dorm with four boys. Hoping to recover from the indoor pools comment, Mary-Kate stepped to the fore:

“Does it run on double-A batteries?” Tyrone asked.

“How impressive is its resolution?” Derek asked.

“Does it include a thirty-two-bit RISC-CPU with embedded memory?” Garth asked.

They’re computer geeks! (And Derek’s surname is “Wang,” so extra funny.) This was a startling development. I knew that large sections of the internet were writing fantasy fiction about the Olsen twins; I didn’t know the reverse was also true. But then, with adulthood approaching, I guess they have to manage the transition of their fan base from pubescent girls to lecherous men.

The inclusion of geeks as love interest had me hooked, and I couldn’t wait to find out how the twins would manage to pry them away from their computers. (“Stop posting about how you’re about to kiss one of the Olsen twins, Derek, and just kiss me!”) But then a new figure entered the scene. He was Colton, and I knew he was trouble because his clothes were described (“cuffed jeans, black sweater, and grey trainers with black stripes”—which, incidentally, boldly puts an Americanism in “sweater” right next to two Briticisms in “grey trainers”). Colton looked “like those models in the Gap ads.” He skateboarded, snuck through tunnels, cooked pizza muffins, and his great-grandmother invented the pencil eraser. Or so he said. It quickly became apparent that Colton was a pathological liar. Ashley picked this up straight away, but Mary-Kate was blinded by infatuation.

Alas, if only they’d gone to the geeks, a few minutes Googling would have punched holes in Colton’s story. But no. Old fashioned Scooby-style investigation ensued, with plenty of creeping around in tunnels. At one point, the book got into a bit of trouble when the story required that the twins and two other girls return to the tunnels, but there was no motivation for them to do so. Authors hit situations like this from time to time, and I tell you, it can be a struggle. The solution to this one, though, was pure genius:

“I am not going back down to those tunnels,” Cheryl declared. “I’m tired of sneaking around.”

“We have to go back,” Elise said in a small voice.

Everyone turned to look at Elise.

“I dropped my Peppermint Pink blusher in the tunnel,” she explained. “It must have fallen out of my sweatshirt pocket last night.”

“Why can’t you just buy another one?” Kirsten asked.

Down in the tunnels, Ashley got off another zinger:

“Wait!” Mary-Kate said. She pointed to a narrow tunnel. “I know we never went through this one.”

“Let’s not and say we did,” Ashley blurted out.

So Mary-Kate was already steamed when they discovered Colton’s secret: he was the son of the tyrannical Headmaster! His full name was Colton Harrington III, he was stinking rich, and he’d lied non-stop to them since they met. This, you’d expect, would be when Mary-Kate slapped him, realized how she’d overlooked the gentle love of the geeks, and learnt a few life lessons about untrustworthy men who look like Gap models. But no: in the greatest love tragedy since Molly Ringwald chose Andrew McCarthy over Jon “Duckie” Cryer, she fell into Colton’s arms. There the book unexpectedly ended; I say unexpectedly because there were still dozens of pages left but they turned out to be full of advertisements for other Mary-Kate and Ashley books.

But wait! All was not completely lost for the geeks. They missed out on the twins, but in the final scene Garth scored a slow dance with one of their hangers-on, Kirsten. Alas, even this was tinged with tragedy. Kirsten quickly complained that Garth was “more into computer games than smooching,” and thus the relationship seemed doomed. Oh well, at least it was realistic.

BRILLANT ! What a great book ! I am wowed over..! Where can
this book be found? Does it have a Mensa rating?
Keep up the reviews....!
We love you Max !
Silver Cloud

Why I know this, I'm not sure, and I even find it a little scary that I *do* know this, but... although they are twins, they are not, in fact, identical twins...

There goes your mitosis theory...

Location: Belfast, Northern Ireland
Quote: "Because its always fun to hear something stupid"
Posted: 5962 days ago

Wow sounds like a real classic. Any chance of Jennifer Government investigating tunnels twice in the same book Max?