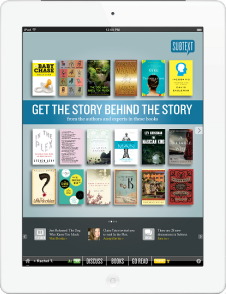 Location: Morristown, Indiana
Quote: "Why do I blog? Simple, because Max Barry blogs."
Posted: 3740 days ago

I'm very confused on what to do with electronic books.

Can you make an e-signature to sign my electronic Max Barry books? Seriously, if I ever meet you, what the heck am I supposed to do?! Have you sign my kindle?

What about if I meet other authors I enjoy? Should I have them sign my e-reader?

...a few years from now, all I'll have is an outdated e-reader with the a bunch of random signatures on it.

It sounds fascinating, from both a reader and writer's perspective. Unfortunately, I'm an android user, so I can't play along. I wonder if they'll make a droid version.

Location: scenic monterey, ca
Quote: ""The rest is not our business.""
Posted: 3738 days ago

wow, i have to say that Subtext sounds kind of... horrifying. the i'm-so-cleverness of so many on the internets is already terribly off-putting, but then to have that intrude on a book? it'd be the digital equivalent of buying a marked-up, highlighted, coffee-spilled on used book.

personally i'd much rather just read what the author has to say.

you may rest assured in the knowledge that all your works will come to at least one reader unsullied. and i like 'em that way.

Location: Nationwide
Quote: "Jennifer Government was my real life, stuff you couldn't make up actually happened to me from 2001 to 2011, and can be read in lulu dot com book : The Sacramento Torture Gang and the Evil Blue Box "
Posted: 3737 days ago

Adam, you can always ask them to sign your e-copy with their certificate.

I have to agree with ryandake about the whole Subtext affair. Without some serious moderation it's all going to be spoilers, and even if it's not, why would I want to be taken out of the book and read what John Doe thought about it? That's the equivalent of somebody talking loudly at the pictures.

This seem to be great as a text version of Japanese niconico website, but it have a great problem that it have no android client.