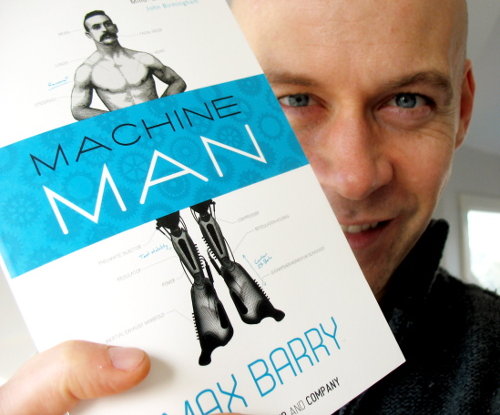 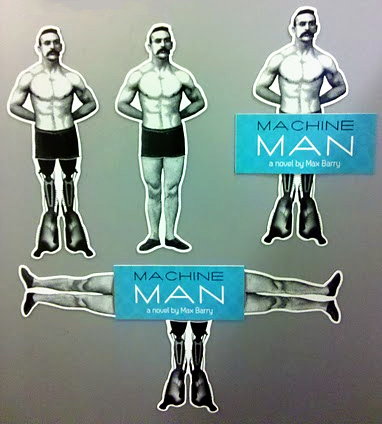 Cool. I look forward to reading it. I tried the first 4 or 5 installments on-line, but the format just wasn't for me. I thought it was an interesting idea to write a "book" in that way, but I just want to keep reading when I have a good story in hand.
Keep writing, Max!

PPS: Make the competition so people post their favourite quote from the book or online version as a twitter or facebook update. Free promo and more followers for you, magnets for me?

Location: Germany
Quote: "One more, and I'm going to consider you my penpal."
Posted: 4240 days ago

Even though I'm slightly scared of you, now that I've seen that pic of you as the creepy waiter in Syrup.

I'll be getting this at the iBook Store as soon as it's available! I have made the decision to go to purely digital books. It's not that I don't love paper books, I just don't have the space.

Location: Brighton, England
Quote: "How much do you know about yourself if you've never been in a fight?"
Posted: 4240 days ago

What is happening with publishing the book in the UK? What about meeeee? :( Can you post me a copy? Thanks :)

OK then, how about this. Margaret Atwood, Famous Canadian Author (TM) is associated with a product called the "LongPen" (see link below), devised as a way for authors to conduct book signings even though they are half way around the world (which is actually the case when we are talking about you in Australia and me in Canada, eh). Do you get the symmetry here Max? Machine Man book. Automated pen. Author signing book with automated pen. ...No, you're right. It's too cute. Forget I ever mentioned it....
But I would love to have a signed copy of that book.

what I want to know is; How the hell are there two tim's?

i preordered my copy on amazon a few weeks ago... can't wait!

Gonna preorder my copy of it on Barnes & Noble... Like what voidref said, I'm also going to all eBooks, because of the space issue (it's so awesome to have a gazillion books at your fingertips, plus you can't get paper cuts!).

Can't wait to read it! I'm a little sad you're not doing another US book tour (I loved it when you did a reading from Company and an early preview of Machine Man in Austin at the BookPeople store), but a virtual tour is kinda neat too, and as you said, very fitting.

Oh, I WANT those magnets.
And PLEASE do not do something via a social network. YOU were the coolest thing because you had a BLOG. What happened to doing a contest from here. (I closed all my accounts as I had a creepy stalker find me on Facebook- down with social networking)

The person who converts the highest percentage of their own body 'meat' to 'machine' wins a book and magnets.

The competition writes itself.

Cover looks awesome! Congrats on a real live book to hold! Hmmm...maybe you could have a caption contest regarding the magnets or a random picture...or the magnets placed in a setting somewhere?! Best caption wins!

It's just not cost effective for me to buy a ticket to Comic-Con for a magnet. There must be an easier way for me to get one. I have a spot saved on my fridge and everything.

Its your magnetic personality or a psychopomp dressed up as one - if I knew what I am talking about, I wouldn't talk, ......... all this magnetism has drained my brain - like Philip K. Dick said "Do Magnetic sheep dream of androids" - attractive stuff aka magnets

That Atwood robot pen is fantastic. You just know they're working on a version that can kill people.

Fucking magnets, how do they work?

Location: San Antonio, TX & Peoria, IL
Quote: "I think, therefore I am. This but merely scratches the surface of what it is to be Human"
Posted: 4239 days ago

Any idea when us brits might see it on the shelves?

Can't wait to see whats changed from the online version.

What version do you make more money on yourself ebook or print?

The Atwood pen. What will archaeologists say in the Future about Margaret's misanthropy. Yes Max, I agree with you 100% "somebodies gonna die" Remember "First they burn the books, then they burn the people"

I've preordered it ten minutes ago, so have an order of fries on me; and if your cut of the book's price is big enough have a milkshake too. :P

I want magnets, pre-orders should come with them. Just saying.
Also, I'm amused that the ebooks through scribe are called "bookish".
Also, if you do a virtual tour, how are you going to sign all my books for me - especially this one with my name in it **squeals with excitement**

Working in print, I know how exciting it is getting that first final hard copy of something you've been working so hard on :)

Location: Atlantis
Quote: ""Redeem your mind from the hockshops of authority." - Ayn Rand"
Posted: 4239 days ago

I suspect that a lot of the pleasure readers get from meeting an author in person is the same as that derived from holding an actual, physical book in one's hands. Although one hopes that fewer spines get broken.

Location: Sydney
Quote: "vote with your wallet"
Posted: 4238 days ago

I'm way too tempted by this idea of "competition" so here's my suggestion: something along the lines of Cranium, where the entrant uses a photo, drawing, clay figure (photo of), or acting out to represent something out of the book. Voted by readers. Winning categories include: most Aussie votes, most global votes, and most non-human votes.

I know... all this for a few lousy magnets.

Location: Pittsburgh, Pennsylvania
Quote: "God whispers to us in our pleasures, speaks in our conscience, but shouts in our pains: it is His megaphone to rouse a deaf world."
Posted: 4237 days ago

How about (for the contest) a tournament that pits the entrants against each other. Each entrant submits something to do with Machine Man, like a photo, short video of one scene, or whatever. Then members vote on which is the best, and the winners advance to the next round.

Location: United Kingdom
Quote: "should cannibalism be grounds for leniancy in murder as it's less wasteful? Discuss. "
Posted: 4235 days ago

Damn my country! I live in Bedfordshire and I agree with Max! Bedford is horrible...

Location: scenic monterey, ca
Quote: ""The rest is not our business.""
Posted: 4235 days ago

join us on Goodreads for your virtual tour! say yes!

Location: Morristown, Indiana
Quote: "Why do I blog? Simple, because Max Barry blogs."
Posted: 4233 days ago

I think you should do a random drawing like you did for the zephyr holdings cup and poster...that worked out well for me.

Or you can give the magnets to the person who writes the best haiku:

Max Barry is awesome
Magnets should be sent to me
Seriously. NOW!

Ah! No book tour?! I was totally going to have you sign the Australian version of Syrup I got when I was in Australia last year (I liked the cover better than the one on the American version I already have).