A Short Story Broke My Brain 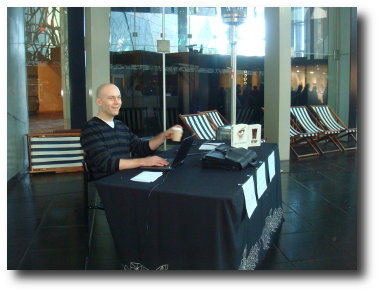 You might be wondering what happened to that live short story. I did it. I just haven’t written about it because I lost the ability to form coherent sentences.

I knew it would be tough. Turning up at the Melbourne Writers Festival with a laptop, plugging into the big screen, and writing a short story from scratch while people watch: that’s not the recommended writing technique. I think that’s the opposite of what you’re supposed to do, which is something about forgetting the rest of the world exists. It’s hard to be creative and self-conscious.

But that was half the fun! Come watch Max struggle! I was already writing an online serial in real-time; how much worse could this be?

Lots. I turned up on the day, ready for action, at the table they’d set up. It was in the corner of the atrium, hidden behind the Festival’s Information Desk. On official maps, you couldn’t see it, because it was obscured by the word “INFORMATION.” This struck me as problematic. There was no signage to indicate who I was or what I was doing. Shortly after I began to set up, a man stopped and asked for directions to a panel. I decided it was time to make up my own signs. I did three, and stuck them to the front of the table: the first said, “Hi! I’m Max Barry.” The second said, “I’m writing a live short story today.” The third said, “Because I’m stupid, that’s why.” This turned out to be truer than I knew.

Half a dozen people had gathered. About this number stayed the entire three hours, and may I say to those people, I’m incredibly touched and grateful, even though you destroyed my sanity. There was nowhere for them to comfortably see the screen and me at the same time, but that didn’t deter them; oh no. They made the best of things, craning their necks and reclining chairs like they were beach lounges. That way, they could see pixelated, perspective-warped words on the big screen while staying close enough to make out the individual beads of sweat dripping down my nose.

But I’m getting ahead of myself. First I had to chase down Festival people, imploring somebody to plug me into the big screen like we had damn well arranged. I hate to knock the Festival, because it’s a great event, but this was really crap. People were waiting.

Once I was on the air, I canvassed my little audience for ideas. I got some great ones, some good ones, and some I still don’t understand today. The two that jumped out at me were both about pregnancy: one about a couple whose due date comes and goes, and goes and goes, and another about renting a baby. In retrospect, I probably should have been wary of both of these, because they’re similar to two other shorts I’ve written: How I Met My Daughter and A Shade Less Perfect. I was already defensive, feeling around for tried and tested tools.

But it was only 11:30am: I was full of energy, optimistic! When people came up and asked for directions, I tried to help them out, then went back to my notes. Sometimes I asked for feedback from the people standing around. Then I realized I didn’t have to: I could hear their reactions.

Let me say that again. I would type a sentence, and hear people inhale, or snicker, or lean together to discuss it. Now, I guess I knew this might happen. And, at first, while I was messing around with notes, it was funny. Even useful. But then I started writing. And it was like they were INSIDE MY BRAIN.

The longest I ever sunk into the story before remembering that people were watching was about 45 seconds. Often I would be halfway through a sentence and someone would stop by to chat or offer suggestions or ask where the bathrooms were. Which is what I signed up for, of course: this was meant to be interactive. But it was like being woken from a deep sleep eighty times an hour. Two parts of my brain that don’t normally meet were knocking into each other and I wasn’t sure which of them was me.

By the two-hour mark, I was flagging. The story wasn’t awful, but it didn’t feel right. It was derivative, of me; like something not new. I wasn’t connected to it. I had honestly tried to do this right, but if I’d been at home, at this point I would have closed the document and checked my email.

Since that would have been inappropriate with an audience, I ploughed on. At 2pm, I finished. I thanked everyone who had stuck around, and I meant it, even though I already knew I would be spending the next few days trying to scrub them out of my brain. Then I left. I felt like someone had beaten the creative part of my mind with sticks. The rest of the day, I struggled to talk like a human being. True, I have that problem normally. But this was even worse than usual.

The next time I sat down in my study, I felt them there: phantom story-watchers. Halfway through my first sentence, I almost braced for a snicker. But it didn’t come. After a while, I forgot about it. I was okay. I was safe again.

P.S. At the time, I was planning to finish this short story at home. But now I don’t think so. You can, however, see the bedraggled, unfinished orphan I came up with.

P.P.S. The random text at the end is when Fin sat on my lap and did some typing. That was cool.

Y'know, of the ideas on the 4th page, I'd have guessed "Guy goes insane writing short story in public" would have been the one most suited to the situation. It gives ample opportunity for interaction. And as they say, "write what you know" ;)

The rent-a-baby idea reminds me of the movie rent-a-kid ( http://www.imdb.com/title/tt0114268/ ). However, it does read nicely enough that I'd keep reading if there was more.

Location: Seattle
Quote: "It wasn't me, I wasn't there and did nothing."
Posted: 4240 days ago

I have an idea for you... team writing. You and another author, or maybe a fan, each take turns writing sentences in public. May be more terrifying and insane than what you did, but it would be interesting.

You never post pictures of Mr. Max. Why? Does she have two heads? Is insanely private? Just wondering. She must be quite the girl to put up with a writer...

Location: Paris, Texas
Quote: ""the only difference between a mad man and me is I am not mad" "
Posted: 4240 days ago

I enjoyed reading about your experience, it was funny. I love when you make me laugh out loud! I especially like the signs you posted at your table. I liked the story! if I ever get married, I hope I am not the type of wife who makes my husband rent a baby he is not ready for!! I think I'd rather just rent a couple of chickens. Thank you for the laughs and thanks to Fin for her excellent input! ~Sara~

I feel really bad for Stephanie... does no one want her? I want Greg to love that baby! It's a happy ending right? Right!?

Location: West Terschelling, Netherlands
Quote: "why yes I do hate God, thats nothing personal, I hate all insane powerhorny mass murdering pschycos that tell me what I should do"
Posted: 4240 days ago

I like that story sofar actually, nothing compared to Jennifer Goverment but thats like comparing the doodels of your child to Vincent Van Gogh.

Id have the guy fall inlove whit the kid (no not like that, platonical bro!) but then having to return it.
what if the baby rental clinic creates clone babys, and the trail ones turn to goo after their trail.
have the guy decide to love the kid, but the wife perferrign to wait, and when the guy runs away to save the kid, it turns to goo in his hands, FML moment!
the plan of the rental people was to give them another baby whit the same genes (or others, whod ever notice?).
just a suggestion, great writing even under pressure Max!

u should have written a bathroom story - since you were the bathroom guide, after all...you were damn near a bathroom attendant with a type writer. :) just kidding.
...a story complete with feet taping and "favors". :)

Location: Trinidad
Quote: "To die is gain"
Posted: 4240 days ago

As an engineer, some of the more important problems I work on bring my colleagues, my boss, and sometimes my boss' boss peeking over my shoulder.

Besides their being ocassionaly helpful, I work better under that kind of pressure because I'm more interested in finding the solution, just to know what it is.

Are you motivated more by writing the story, ending it, or the finished product?

Location: West Midlands, UK
Quote: "I was trying to help Max revive the NationStates2 code from Jolt/OMAC! but failed :("
Posted: 4240 days ago

I kinda guessed that Fin would "type" on your laptop!

Why not bring her on holiday to the UK?

How are the chickens?

Location: Melbourne
Quote: "I'd rather be arrogant than wrong"
Posted: 4240 days ago

I hate it when people watch me write. When I'm writing on the train I shield my work, as if someone is going to copy it!

The picture adds a nice touch to this update.

Location: Washington DC
Quote: "Impossible you say? Nothing's impossible when you work for the circus!"
Posted: 4236 days ago

Thanks for showing a bit of your thought process after the story. I especially like the maybes - maybe he does this, maybe it's an alien, etc. I do this too, and it's good to know I might be on the right track, or at least on your track, which honestly seems fairly right, when I try to write.

Location: Atlantis
Quote: ""Redeem your mind from the hockshops of authority." - Ayn Rand"
Posted: 4236 days ago

Made me wonder where the heck they are getting these babies, and what they do with the ones that keep getting returned - and if you skip a payment during the trial period, do they repo the kid? If a woman decides she wants to split up with her man and keep the kid, can she get child support?

I take it you're back to normal now, Max?

Wow, Fin has some real talent! Being able to do [ and ] with those little hands of hers! ;-)