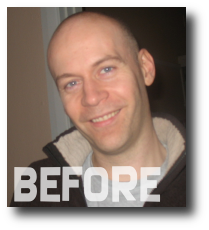 “It’s for Movember. You know about Movember?”

“I know Movember,” she said. “But no. You’re not growing a moustache. They’re creepy.”

“Jen! This isn’t about the moustache. It’s for a good cause. It’s about raising awareness. You think I want to grow a moustache? Do you? Like, what, as if I’ve always secretly wanted to, but until now been denied by social pressure? Honestly!”

She eyed me. “You don’t actually know what the cause is, do you?”

“I believe it’s something to do with prostate cancer,” I said. “But I have a whole plan. I’ll announce it on my web site, see, and people can sponsor me.”

“Right! Yes! They can sponsor my moustache.”

She sighed again. “You’d better get some donations.”

If I had money, your moustache would be the first I'd support. Movember = awesomeness!

Location: Houston, Texas, USA
Quote: ""The good Earth â€” we could have saved it, but we were too damn cheap and lazy" -- Kurt Vonnegut"
Posted: 5219 days ago

Location: United Kingdom
Quote: "Who is more foolish, the child afraid of the dark or the man afraid of the light? - Maurice Freehill"
Posted: 5219 days ago

I'm glad you have such an understanding wife! I'll sponsor, but you best be taking a photo every day and slapping up a photo album on this website!

Jen's right, they're creepy. D: But this... this is Going Places! Pics or it didn't happen!

Considering that I'm now a proud mustache wearer (and have been for almost a year), I have to welcome you to the club and support this great endeavor!

Good for you, Max! Way to stand up for your right to look creepy.
No seriously, way to do something weird for a great cause!

Location: the Stygian Empire
Quote: "Flesh is a design flaw."
Posted: 5219 days ago

I'm sorry. I can't endorse this. The mustache, I mean.

What kind of moustache will it become? English? Dali? Imperial? Hungarian? (Just listing some from http://en.wikipedia.org/wiki/World_Beard_and_Moustache_Championships )

Location: Atlantis
Quote: ""Redeem your mind from the hockshops of authority." - Ayn Rand"
Posted: 5217 days ago

In the real world (i.e., the USA), a thirty-something balding (no offense) man with a moustache and no beard (or one of those nasty little over-pruned beards, like a goatee) might as well wear rainbow biker shorts and pink flipflops. It's like a 600 gigawatt gaydar beacon. Of /course/ the wife objects; she knows the next step is wearing leather chaps to an all-male singles bar.

Here are some "artist impressions" of how Max might look with moustache: http://www.mediafire.com/imageview.php?quickkey=rvejnytmqlg&thumb=5

Location: the Stygian Empire
Quote: "Flesh is a design flaw."
Posted: 5215 days ago

i would definitely donate, except i'm in the US... and my economy just imploded.

Location: South England
Quote: "The trouble with having an open mind, of course, is that people will insist on coming along and trying to put things in it."
Posted: 5208 days ago

A worthy cause Max, I've chucked a few AUD your way. Much like gStein our economy is looking pretty nasty here - but thankfully the exchange rates between GBP and AUD (and GBP and USD) are still rather favourable, making me seem much more generous then I really am!

Do realise though Max I'm expecting my moneys worth with this Moustache. I expect you to wear a fertalizer mo' mask to bed every night... that's sure to convince Jen how serious you are? Right?