Points on a Continuum 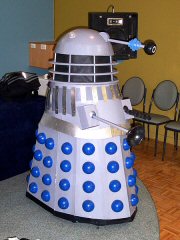 I’ve spent most of the last three and a half days at Continuum, my first ever science-fiction/fantasy/horror convention. I didn’t know what to expect, so my first stop was the “So This is Your First Convention” panel. This proved to be a little alarming, as Danny, the Chairman, talked about the “6-2-1” rule: “Each day, have at least 6 hours of sleep, 2 meals, and 1 shower. Please, the shower is particularly important. I can’t stress that enough.”

But I soon discovered that sweaty nerds dressed as Darth Vader were actually thin on the ground. Instead, there were endless ranks of spunky young women with arresting eye shadow. What’s more, they were friendly, thus rectifying the single flaw I’ve always found with spunky young women with arresting eye shadow in the past. Danny was right: the convention felt like an intimate party for a couple hundred people. Everyone was excited to be there and ready to party down.

The convention’s centerpiece was the Maskobalo, a big costume party. There I learned another important lesson: nobody respects the guys who wear tails. “Furries,” said Sarah, a blindingly blonde punk rocker wearing a SHOW US YOUR RIFFS T-shirt. “See, some of them love animals a little too much.” Actually, that’s not what she said. What she said terrified me to the depths of my soul, and I had to bang my head against the floor until I could no longer remember specifics.

My favorite part of the Maskobalo was the most realistic Dalek I’ve ever seen—when it talked, even the lights on its head flashed—doing stand-up comedy:

Yesterday I went for a job interview. The woman said, “Do you have any EX-PER-I-ENCE?” I told her, “Daleks have ruled the galaxy for THOU-SANDS—OF—YEARS!” She wrote: Some management experience.

Just before the Maskobalo, I got talking to Ian, who had read some of my blogs. He said, “That one you did about drool, did you make that up?”

I was shocked. “You’re not suggesting I make up blog posts for comedic effect.”

This had sounded a lot less sarcastic in my head. Ian laughed. “Riiight.”

| MaxBarry.com › Writing › Points on a Continuum