I heard Syrup is a thinly-veiled description of Hewlett-Packard. 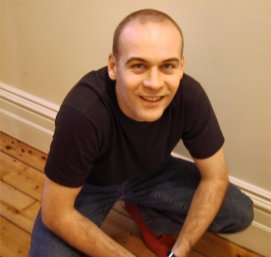 That's a filthy lie. Why, if HP was like Syrup, it would be a seedy den of politics and corporate back-stabbing, brimming with sexual tension. That is absolutely not true. There was very little sexual tension.

Actually, HP was a great place to work and taught me a lot about how companies function. I worked with some tremendously talented salespeople, most of whom used their powers for good instead of evil.

So did Coca-Cola sue you or what?

Nope. I never heard from them. Before publication, everyone expected Coke to either lawyer me to death or put me on the payroll. Nothing happened, which was kind of disappointing. Either would have been exciting.

It just kind of happened. Syrup is a very American story, set in Los Angeles, so some people wonder how I wrote it. My answer is that it's not about the reality of American life; Syrup belongs to the sanitized, pop culture America we see on TV. That's something the whole world is familiar with.

Is it true that all second novels are crap?

Yes, it is. That's why I wrote a terrible novel after Syrup, built a bonfire, and ritually destroyed it. The world needs never know. So Jennifer Government isn't really my second. In fact, it's more like my fifth. There have been a lot of ritual bonfires in the Barry back yard over the years.

Why didn't you call yourself 'Maxx' in Jennifer Government?

"Maxx" was always meant to be a one-book joke for Syrup -- although a friend suggested that if I write a sequel, I could call myself "Maxxx," which is pretty funny. But it makes no sense for Jennifer Government. So "Maxx" is consigned to history, only popping up now and again to frustrate computer searches.

Is Jennifer Government an anti-corporate novel?

Kind of. But I mostly like corporations. There's something inherently funny about them, both in how they work when you're inside one, and how they operate in society.

I don't believe corporations are particularly good or evil, though; I think it's a mistake to buy into the idea of corporations as real people. A publicly-listed corporation exists for the sole purpose of making money. It's not legally permitted to do anything else: that would be a breach of its fiduciary duty to the shareholders. Corporations are wealth-creation machines, and their employees are cogs in that machine, to be jettisoned unless they're producing. This is not the result of cruel CEOs or greedy executives: it's just what you get from an entity that has just a single, economic goal. Nobody should be surprised when we discover another corporation putting profits ahead of people's well-being, because that's all they're allowed to do.

What are your favorite books?

Funny you should ask! Check out my bookshelf.