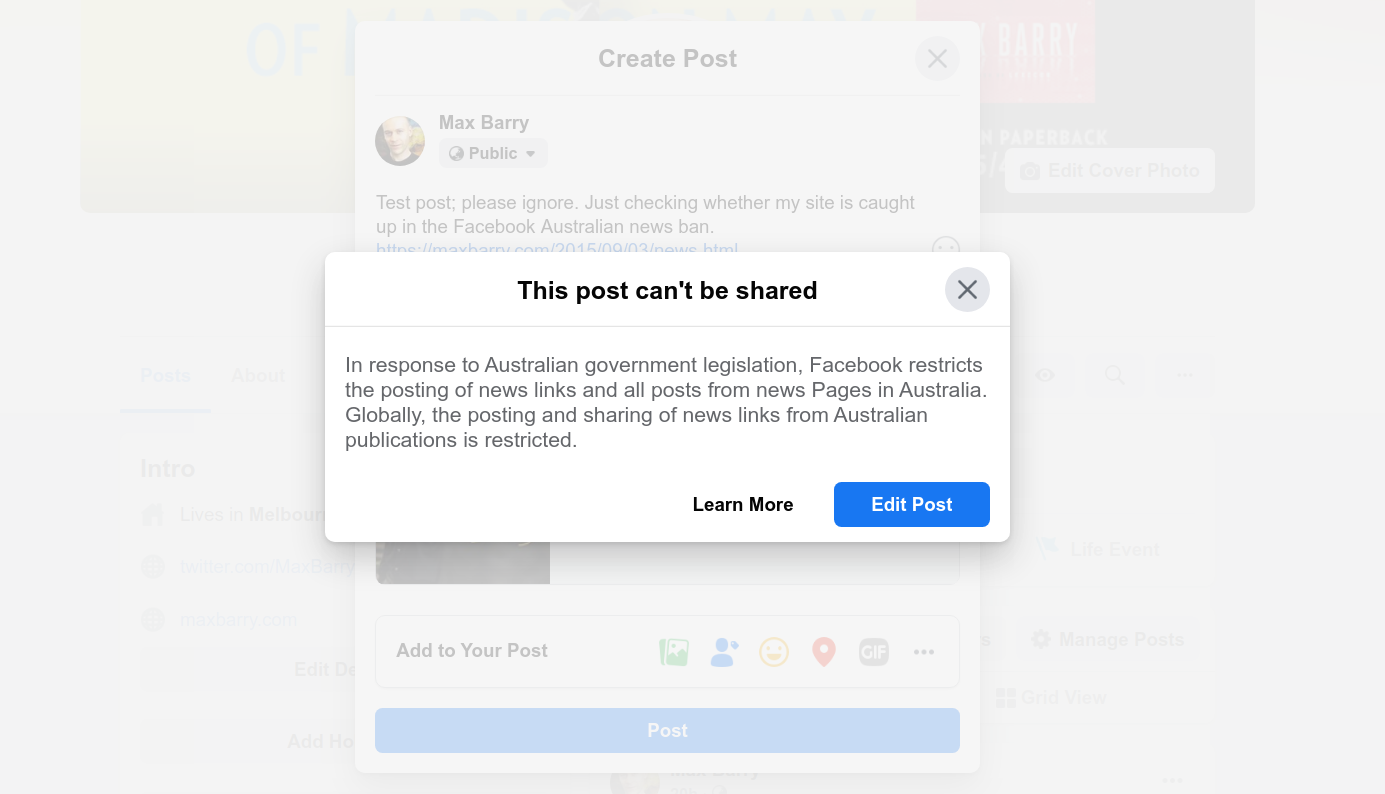 First, I’d like to say how gratifying it is to finally be taken seriously as a news publication. But the interesting part is how Facebook has responded to an Australian law it doesn’t like by nuking users. Here is the story so far:

I assume this situation is temporary and either Facebook or (more likely) the Australian government will back down. But it’s a fun reminder that there are now basically three companies in the world who control what everyone hears: Facebook, Google, Apple. When they choose to, as Facebook did, they can excise a big chunk of what would otherwise reach your attention, and it’s just gone.

What happened to antitrust? That’s what I want to know. I’m pretty sure we used to be a lot more interested in breaking companies into smaller parts before they reached Godzilla proportions and couldn’t be stopped from doing whatever they liked. I feel like we should have kept doing that.

But I’m glad I’ve maintained this site, even as we all gave up visiting a list of favorite bookmarked sites and switched over to reading whatever the algorithms told us to. If I’d relied on a Facebook page, everything I’d ever posted would be gone.

There's a lot to be said for good old RSS news feeds. Too many sites have either abandoned their news feeds to Facebook etc or just have "blog" articles that are not connected to any subscription.

I've got hundreds of feeds to select articles from and I don't have to rely on FB's algorithm for determining which subscriptions get my attention.

I've also noticed that Google is effectively blocking some personal sites and just routes you through to their News Showcase without so much as an explanation. I've found that DuckDuckGo still finds those sites.

Overall Australia's middle power status - and gift for poking hornet nests - is making us a good kicking proxy for China, Facebook, Google and WeDetestBaldNovelists to send their messages to Washington and Brussels.

I don't use RSS much any more, because the social media companies do offer a better an experience in terms of curating and presenting content. But on the downside, they are evil and consolidating power. So it's tough.

I think we need open data interchange standards, to get back to what the internet promised to be before everyone started building walled gardens.

I had to try it myself to see whether they've realized how stupid this blanket blocking of Australian sites is. They haven't. Stupid, stupid, stupid. It's unbelievable. They let all sorts of disgusting things be posted all the time, totally insane stuff with no basis in fact. Gah!

I'm still listening, so that's at least 3 of us.

Interestingly though, I get abc.net.au news via Facebook messenger, and that still works, so blocking the news must not apply to the messenger component of Facebook.

> I think we need open data interchange standards, to get back to what the internet promised to be before everyone started building walled gardens.

When you say open data interchange standards, do you mean like Open Banking, or CDR as it's called here: www.cdr.gov.au/what-is-cdr
It's supposed to make its way through various industries after they finish banking. But I can't see them making it through to media companies though, as they can't think of what customer data they hold that you'd want to share with other providers.

Love ya Max. Hopefully FB will cut off it’s nose to spite it’s passive aggressive face. In the mean time, we can find you here, as you reminded us.

Location: Texas
Quote: "The urge to save humanity is almost always a false front for the urge to rule."
Posted: 283 days ago

On the plus side, it gives Australians a chance to kick their social media habit. We should all be so lucky. Unfortunately, the last guy in the White House showed no interest in taking the antitrust hammer to big tech because he was addicted to it and the current guy...well...he’s owned by them. No relief is coming anytime soon. Social media is humanity’s greatest mistake.

I read Jennifer Government 15ish years ago and thought it was the most horrific thing imaginable since the classic dystopias. I think we’re headed towards something worse.

I don't want social media companies to curate content for me. Facebook's curatorial decisions were usually to not show me updates from pages I had subscribed to, and endless updates about US sporting teams. I don't care about *any* sporting teams, but Facebook decided that I needed to know!

I wish Facebook would ban me. Still I sympathize. Not nice to be punished just because you’re special .... Hm, I’m thinking of getting a buzz cut.

Location: San Francisco, CA, USA
Quote: "“People resist a census, but give them a profile page and they'll spend all day telling you who they are.” Max Barry"
Posted: 283 days ago

I got your newsletter and opened your blog page then made a share text with the title, url, by You, and posted it to Twitter, Facebook, and Tumblr. I copied the picture of the FB notification and used that. Could you put share buttons on your blog posts, please. It would save me a minute and may encourage others to share your blog content. The newsletters and using other social networks beside Facebook is one way to kick the big toe of a giant.

Yeah I wondered about how the would address the disparity between conspiracy theories and real news. My hypothesis was they would just ban news and leave the garbage. Seems that was correct. If they can figure out how to do that though i suspect their arguments about how hard it would be to prevent conspiracy theories from cropping up is a load of crap as well.

It is scary event - we are powerless and vulnerable in a volatile world.
I am pretty sure in the U.S. that the anti-trust laws have been blinded and toothless for many many decades, but crying out for them is justified. Who will stop these network behemoths? In the U.S., corporations and wealthy interests have bought the legislative, legal and administrative processes of government. This is a different case. It is a little like water and electric companies shutting off the public supply because the government wants to regulate or tax them. I agree with the point that many vital services are dependent on operable tech.
And everywhere there has been control of speech, things have gone badly for ordinary people.

Location: Turn left at your CPU
Quote: "How can something be deemed artificial if it is itself. e.g. A.I."
Posted: 283 days ago

So the Government has two vaccines in place. One for the body and one for the mind.

I miss you AltaVista.

I got here from your RSS feed! I want chronological order for my feeds, and Facebook doesn't offer that as an option. I still like pages on there to support creators like you, but I don't rely on it for your posts.

I can't believe that the government (which I generally support) has made me support Facebook (who I loathe with the fire of a thousand suns). This protectionist bullshit should never even get near the Liberal party room, let alone become an actual government bill. I sincerely hope FB doesn't back down, and that Google joins them in telling the government to go and stuff it.

Now you and Donald Trump have something in common: you were both banned from Social Media.

However, I don’t think Donald Trump has the *cough cough* Brain Power that you do to write novels.

Location: Antwerp, Belgium
Quote: "Seek nothing and you will find everything."
Posted: 283 days ago

That quote is rather scary: "there are now basically three companies in the world who control what everyone hears: Facebook, Google, Apple." You already point to part of the solution: "What happened to antitrust?" The arguments to break-up big tech are there. But the willpower is lacking, partly due to lobbying, partly due to fear for loss of influence. If politics benefits from having a voice on social media, you can be sure they won't go all the way in limiting it. And the cynic would argue how politics are using their law-creating power as a shakedown for big tech. But this is more than a black-and-white issue.

PS: as a loyal reader via RSS, I'm glad this ban doesn't affect your news from reaching me. But sadly I'm also a aware how only a vast minority uses these alternative technologies.