Max’s Spectacularly Unhelpful Book Review, or: My 7,000 Pages of Shame 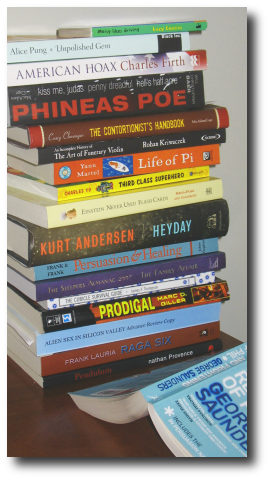 Now what we’re going to do is ignore the whole “What the Fukk is happening to Max’s new book?” question. Because it’s going to take some time to resolve, and me posting regular updates on my blog is going to freak everybody concerned right out, and for my own mental health I should probably start thinking about something else.

But thanks to everyone who wrote in with kind words. That means a lot. I’m sure this book will be published. It’s a good book. You’ll like it. The question is not if, but when and how.

So instead of alternating between maniacal cackling and weeping into my sleeve, I will write you a book review. This review is not of books I’ve read. That would be Helpful, because I could tell you if they were any good. This is an Unhelpful review, because all I’m going to say is how these books got onto my bedside table, where they have sat, neglected, as centuries turned.

By the way, in the course of writing this review, I moved the books to see what was on the bottom, and the pile fell on me. I nearly died.

On the weekend I went to the Sydney Writers’ Festival. Many years ago, before I was published, I went to one of these big festivals and hated it, because it was full of self-congratulating blowhards trying to crawl up each other’s butts. But now that I’m one of those butt-crawling blowhards, it was awesome.

I did three panels and got to meet lots of other Aussie writers, which I hadn’t done earlier because until recently I was completely unknown here. Now I’m exactly the right amount of known: enough to get invited, but not so much that I qualify as a commercial sell-out whom everybody bitches about. It was a perfection distraction for a guy waiting to find out if his publisher likes his new novel. (Not that I’m, you know, completely freaking out or anything.)

On my second night I pulled a muscle in my leg. I was asleep at the time. I dreamed that a tiny, blue, jelly-like alien invaded my kitchen and tried to kill me. I stabbed it with a fork and it squealed and staggered around, then it tried to make a run for it so I kicked it as hard as I could against the cupboards. This is where I think I injured myself. Then the alien looked up at me and said, “Mom-my.” I was so shocked I woke up. I think this must be a side-effect of having an active imagination, or doing a lot of drugs before bed.

For my last panel, “Laugh Out Loud,”, I opened with a bit where I pretended someone close to me had just died, then revealed it was just a character in a story I was working on. This probably would have been funnier if moments earlier the host hadn’t paid tribute to Anna Politkovskaya, who attended the Festival last year, and was assassinated for political reasons five months later. If I was a little more professional, I would have junked my opening right there. But I’m not, so I didn’t. Fortunately not too many people seemed to think I was making funny at Anna. And you know, I’m told she enjoyed a laugh.

I read a couple of blogs from this site, which went down very well. It was also terrific to be on stage with my old high school buddy, Wil Anderson; I felt like I was back in 1990, only with no hair.

On the plane ride home I noticed they’re still advising us to brace our heads against the seat in front of us in an emergency. This made sense ten years ago, but now that location is a small, solid screen. If I’m preparing for impact, do I really want to carefully position my face against a rectangle of glass and metal? To me, that really confirms that the whole procedure is there purely to give you something to occupy yourself with other than running around screaming and clawing at flight attendants.

I got home to discover Fin had grown up. I swear, I was away three days, and she learned a hundred new words, got attitude, and her face changed. I am not 100% certain my wife didn’t replace her with a similar-looking child.