Have a Beer with Max in London

As I mentioned, I’m not doing any publicity while I’m in England. But I do intend to have a beer at the Warrington Hotel [Map] at 2pm this Sunday the 28th. So if you’re in range, and you care, you could come along.

I don’t really know how this will work, but I am imagining something like this: you see a 6’2” guy with no hair speaking in an Australian accent, wander over, and say, “Are you Max?” And I say, “Yes, yes I am. Who are you?” And we take it from there. My only rule—and it’s a very strict one—is that there shall be no mention of the Ashes.

I won’t have any books to sell, but I’m happy to sign anything you bring along. And I mean anything. Underwear, other people’s books, you name it. I’m desperate for recognition.

By the way, I was originally thinking of inviting people to a pub in Bedford, but realized I couldn’t live with the stain of that crime on my soul.

Update: Well that was great fun! Thanks to those who turned up. I gotta say, it’s pretty damn cool to be able to gather an instant mini-party of interesting people just by posting on my blog.

32 comments | MaxBarry.com › Max › Have a Beer with Max in London

I’m in England. Huh, when I say it like that, it’s as if I just breezed halfway around the world during my lunch hour, instead of undergoing 30 hours of torture inside a metal tube with an 8-month old baby and a planeload of people conspiring to prevent her from sleeping.

Jen’s family live in England, and occasionally we fly over to visit them. We usually stay for at least a month, and—since the purpose of the trip is to spend time with them—visit absolutely no tourist attractions or places of interest. We just hang out in Bedford. For that reason, I have the general impression that all of England is a barely habitable crap-hole full of people who look like they’re about to stab you for your mobile phone, then use it to call their dealer.

Well, that’s not quite true; I have visited a few other places in England, and with one exception (Milton Keynes, I’m looking at you) they have been quite beautiful, or at least interestingly history-soaked. But Bedford is neither. I am told that Bedford’s heyday was in the 1950s, when the local brickworks was the town’s main employer, and you can tell this is true because every single house is constructed in the exact same style from the exact same red brick. Other Bedford attractions include the River Ouse (pronounced “ooze”), which is exactly as charming as it sounds and patrolled by highly aggressive ducks, and… no, actually, that’s it.

Most English people I speak to are hazy on where, exactly, Bedford is. The answer is you don’t care. I think you’re better off not knowing how close you may be to Bedford. If, in your ignorance, you do happen to stumble onto it, well, just hurry on before any of it gets on your clothes.

I have no publicity plans while I’m in England; for some reason my British publisher has always been reluctant to expose me to the public, like a girlfriend embarrassed to introduce me to her parents. I know what you’re thinking: at first I thought it was the hair, too. But no: apparently you just don’t do bookstore events in this country unless you are sufficiently famous. More sufficiently than me, I mean. I’m not sure why, exactly. Maybe it’s considered bad manners.

The police just chased some guy down the street right outside my window. I’m not kidding. Ah, Bedford.

31 comments | MaxBarry.com › Max › My Favourite Author Went To Bedford And All I Got Was This Lousy Blog

You Need This Book 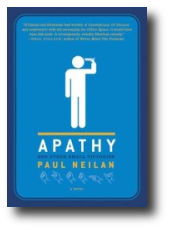 For the first time on this site, I’m about to plug a book that isn’t mine. I know! I feel like I’m growing as a person. Here’s what happened: I got sent this book pre-publication to see if I’d be interested in providing a quote for the back of the book. Apparently the theory is that if people see a quote by some author they’ve never heard of, they think, “Hmm… someone that obscure must know what he’s talking about.”

I get sent quite a few books this way, which is good, because I don’t have to pay for them, and bad, because I don’t get to choose them, and they tend to suck. So I end up on the backs of very few books. (If anyone has seen a book with “Meh, it kind of sucked. —Max Barry, author of Company” on it, though, please let me know.)

Then I got sent a book that was so good I thought they must have confused me with someone much more popular. Like maybe Jesus. This book rocked. It was the funniest novel I’d ever read. It was so good that when I finished reading it, I immediately read it again. And then a third time. It’s currently my favorite novel.

The book is Apathy and Other Small Victories, by Paul Neilan. It’s out in the US today. If you like my stuff, I seriously recommend that you get this. And if you don’t mind Chuck Palahniuk, either, a gaping hole in your life that you never knew existed is about to be filled. Go buy it. Now.

(Disclosure: I met Paul earlier this year, after I’d read his book. But he didn’t promise any sexual favors in exchange for me pumping up his book. Really, he wouldn’t be moved on that.)

Update: Paul has a blog!