Of Poo, And Such

Well, that was good timing. No sooner had I posted a blog about my irrepressible zest for life than the rumblings began. At first I just thought I was hungry. It was dinner time, so I popped down the street and bought myself a hamburger and chips. It was good. It was tasty. And a couple of hours later, it began an emergency evacuation.

I don’t remember having had gastro before. And I’m pretty sure that I would remember this. This was the single most disgusting experience of my life. That’s why I feel compelled to share it with you. Not because I think you want to know. God, no. If you’ve got any sense at all, you’ll walk away right now, sit in the corner, plug your ears with your fingers, and shout, “La la la la!” until I’ve stopped talking. No, this isn’t for your benefit; this is because I went through such a colossal life-changing experience that I need to talk about it to believe it really happened.

Not too long ago, I was talking to a friend about colonic irrigation—long story—and she mentioned that the average person carries around four pounds of compacted fecal matter. Yeah, sorry, now you’ll never be able to not know that again, either. Well, on the positive side, I am fairly confident that I am no longer one of those people.

One thing I found particularly remarkable was how big my stomach must be. I mean, just judging from the available evidence, I must be usually carrying around a shopping bag’s worth of food and associated juices in there. Well, mostly juices. But still. Unless it was expanding on exit, I just don’t see how everything could fit.

Jen and Fin both got gastro as well, but less spectacularly. In fact, Fin’s hardly seemed to bother her: she had a couple of yucks, then got on with business. I suppose when you’re a baby, fluids periodically rushing out of your body without your permission is just part of your daily routine. No need to write a blog about it.

But me, I have a whole new appreciation for the human body. No, wait, “appreciation” isn’t the right word. Fear. That’s what I meant. I’ve been reminded that I’m not completely in charge of this thing; that, under certain circumstances, something else is going to take over the controls for a while. And that’s an alarming idea. Although, boy: what a show!

In defense of living

I don’t want to die.

This means I’m immature. At least, according to the world’s great thinkers. If we’re to call ourselves mature, intelligent adults, apparently we must each come to terms with the things we cannot change in life, and one of these is that it must inevitably end. If you refuse to accept this, it’s a sign that you are still in a child-like state.

But come on. Isn’t the only reason that we die because we haven’t got the technology right yet? I once heard an Australian scientist, Dr. Kruszelnicki, say that the current generation was probably going to be the last to die or the first to live forever. I tell you what, if I miss the immortal generation by a few years, I’ll be pissed.

I don’t get why more people aren’t upset about this. I mean, I’ve read angry letters to the editor about cabbages. Where’s the outrage about the inevitability of death? Seriously, which offends you more: petrol prices, or the idea that one day people will either burn your body or bury it?

Okay, there’s the afterlife argument. I’m not convinced. First, even if you buy the idea that after you die, you go to a better place, that strikes me as a little too much like, “Hey guys, let’s ditch this party; I heard that other one’s way better!” I’m sorry, but I’m enjoying this party. I don’t want to travel halfway across the city only to discover that all the cool people already left or we got the address wrong or the driver decides it’s kind of late so maybe we should just go home. “Let’s go to the other party” never works, and I don’t see why it should start working just because I’m dead.

Can someone do something about that, please? 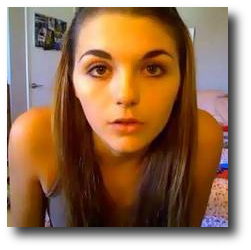 So lonelygirl15 turns out to be a fake. What looked like the intimate video diary of a 16-year-old girl named Bree is actually “a new art form,” courtesy of three L.A. filmmakers. And Bree is really a 19-year-old actress from New Zealand named Jessica Rose.

Some of the thousands of fans who followed her videos on YouTube are upset. Some are angry—very angry. Some don’t see the problem. Some think the videos are more interesting now that they know they’re made up, and some feel like they lost a friend.

Me, I’m voting this a neat piece of marketing.

True, they’re not selling anything. That’s the good news: this didn’t turn out to be an ad for acne cream or a movie. The creators say:

We want you to know that we aren’t a big corporation. We are just like you. A few people who love good stories. We hope that you will join us in the continuing story of Lonelygirl15, and help us usher in an era of interactive storytelling where the line between “fan” and “star” has been removed, and dedicated fans like yourselves are paid for their efforts. This is an incredible time for the creator inside all of us.

It’s funny that people who created something so interesting could write something this dumb.

lonelygirl15 didn’t succeed because it told a compelling story. It succeeded because people thought it was real. Without the deception, there’s nothing special. The filmmakers knew this; they went to a lot of trouble to keep up the pretense, to the extent of posting personal replies, as Bree, to people who wrote in. They built fake relationships with fans. And now some of those fans feel like pauldonald:

the reason why im annoyed is because people are going to use this website to try to boost there acting career so now you cant trust anyone on youtube and i do wish bree was real because i fell in love with the character. im not sure if i like jessica rose coz from the pics i have seen she seems like the total opposite of lonelygirl coz she seems like a easy party girl but even though this is fake im not mad at the person who made this even though it was a bit of a spit in the face.

This is what makes it marketing, not storytelling. Storytelling doesn’t abuse its audience. Without the bit at the start that says, “This is made up,” it’s not storytelling; it’s just lying.

Every fiction writer in history has probably been annoyed by how much more power a “true story” seems to have. But that’s the deal we make: we admit up front that our tale isn’t true, then we desperately try to make it as authentic as possible. Doing it the other way around—claiming to have a true story and filling it with fiction—that just pisses me off. Storytelling? A new art form? Give me a break. When you agree to the deal, then you can be storytellers. Until then, you’re marketers.

How Stripy Is My Jumpsuit

My daughter has a thing for buttons. She’s fascinated by them. Especially buttons that light up or make a beep when you press them—those can keep her occupied for ages—but keyboards are fun, too. She seems to have a particular talent for finding obscure functions or keypress combinations; she’s sent text messages, made phone calls, and locked up my computer.

Now Fin has made a movie. She was playing with the mobile phone, and it has a camera function, and somehow she recorded a short video clip. I have no idea how.

I don’t want to hype it up too much, because she is only 12 months old. But I don’t think I’m exaggerating to say that it’s probably the most insightful, spiritual, brilliant, and meaningful piece of cinema ever made. The ending… well, I won’t spoil it. Judge for yourself.

If you’re not seeing the vid above, you can view it here or here.

31 comments | MaxBarry.com › Max › How Stripy Is My Jumpsuit