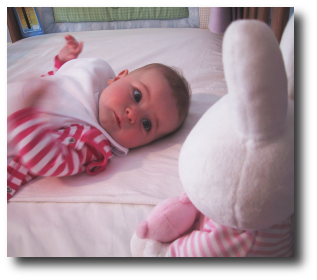 It’s happened! I knew it was coming—the data made that clear—but still, it’s thrilling. Yes, for the first time, more people are visiting my site with Firefox than Internet Explorer.

Okay, it’s a little sad, but I really do find this exciting. I’ve grown into a total geek fanboy since I converted to Linux: once I saw a couple of GNOME developers blogging about Jennifer Government and got all giggly. Tell you what, if open source software coders did tours, I’d be in the front row trying to persuade them to sign a bunch of CDs.

In other news, it’s almost Christmas and I live in Australia, so you know what that means: it’s time for me to go somewhere sunny and do nothing for a couple of weeks. I’m going to Perth to show off my baby girl to Jen’s relatives, so until January, I wish you all the best. (After that, I may be more vindictive.)

And in closing, I have included the photo of Finlay being menaced by a giant rabbit because it amuses me.

While researching Company—I mean, while doing unrelated things in the hope that something would happen that I could use in the book—I heard lots of corporate horror stories. Some funny, some terrifying, most in the same theme: it’s amazing just how clear a company can make it that you’re completely unimportant.

Some of these stories went into my novel, but there are so many others that I’ve created a new web site to capture them: Tales of Corporate Oppression. I want it to become a repository for the best, funniest, and most appalling stories of everyday workplace inhumanity out there.

This is where you come in. If you’ve got a tale, help me get started: jump on in and submit your story. If you don’t, you can still read other people’s tales and vote for them.

In other news, I’ve updated the Company section of this site to include a description of what (more or less) the novel is about. It’s relatively spoiler-free, so should be safe reading… but if you’re one of those people who doesn’t want to know anything at all about it, I applaud you. Assuming you’re motivated by a desire to preserve the mystery, that is, and not because you have no intention of ever reading it. If it’s the latter, I’m not so impressed.

Doubleday has made up some Company coffee cups and Mission Statement posters and I’m allowed to give five away. This is fantastic, because usually this stuff goes to uninterested magazine editors already drowning in book-related collateral, and not to fans, who would stab their own mothers for it.

It’s like this: Company is set within a fictional corporation named Zephyr Holdings, and Doubleday’s cups and Mission Statements have Zephyr logos on them. There’s no mention of me or the novel, which seems a little odd for promotional merchandise, but then it does make them even more cool and obscure.

If you’d like to win a coffee cup and Mission Statement poster, all you need to do is get yourself on my mailing list. You can uncheck the relevant boxes so you don’t get my blogs by e-mail, if you want: the important thing is that you be on that list, and have followed the instructions to validate your email address. Don’t join multiple times, or I’ll disqualify you.

On Monday January 9th, 2006, I’ll randomly select five people from the mailing list and e-mail them. If I don’t get a reply or at least a vacation autoreply within a few days, I’ll draw somebody else.

Thanks to Doubleday for making this possible! It’s very cool of them.

(Note: I know from experience that a bunch of you are going to write in saying how much you’d love a Company coffee cup and you once had a Snoopy coffee cup but it got broken and through some process I can’t quite follow only a Company cup will make your life whole again so can I please just slip you one on the side. But I’m sorry, I can’t: I only have five to give away.)

Update: To clarify, yes, naturally everyone already on the list is automatically eligible.

I Was a Teenage Lawn Mower

I grew up in Stratford, a tiny town in Gippsland, Victoria, where there are ten cows for every human being. Stratford is known primarily for being just ten miles away from Sale, and Sale is known primarily for its maximum-security prison, so that was my youth: trudging ten miles to school every morning while watching carefully in case murderers were lurking behind cows, waiting to leap out and grab me.

I mention this because I was recently reminded of my lawnmower experience. In fact, every time I see my mother or stepfather, I get reminded of my lawnmower experience, because somehow a couple of tiny incidents in my teenage years have bloomed into legend. I am most unfairly portrayed in this legend, so I’m setting the record straight here, where members of my family are unable to respond.

Despite owning more acres of grass than Bob Marley, we didn’t have a ride-on mower. We had a push mower, one so ancient and temperamental that it wouldn’t start with less than ten minutes of gentle caresses and ego-stroking. Or, when that failed, judicious application of a hammer. I frequently complained about this, but my parents just thought I was whining. Which, clearly, I was. But with excellent reason.

One time when I was about 16, I just could not start the thing. I’d tried whispering sweet nothings, touching its most intimate places, the hammer—all the seduction techniques popular in Gippsland—but couldn’t get a response. Finally, exhausted, I went inside to declare the impossibility of completing my assigned lawn-mowing duties. But rather than being sympathetically consoled as you might expect, my mother responded: “I don’t care! I don’t want to hear about it, Max, just mow the lawn!”

Already, I’m sure you’ll agree, there was enough unfairness here to keep a regular teenager moping for days. But being a dutiful son, I pondered upon my dilemma until I came up with an ingenious solution: I got out a pair of hedge clippers and began to slowly move across the vast expanse of our lawn, cutting approximately three blades of grass per snip. My mother saw this out the window, but—inexplicably—rather than marveling at what a plucky, dedicated lad she was raising, she interpreted the scene as some kind of surly teenage rebellion and yelled at me to go borrow the neighbor’s mower, if I couldn’t get ours started.

I was a little hurt at having my clever hedge-clipper idea rejected, but, being always happy to help, was willing to give this mower-borrowing idea a run. And run I did, because by now it was almost dark. I had to race over the neighbors—if I remember right, this was several miles away, around several cows and an escaped serial murderer—then race back and sprint around our lawn with the mower while the darkness closed in.

By now you, like me, no doubt have tears in your eyes at my incredible courage and determination. But somehow my family don’t see it that way: oh no, to them, me running around in the dark with the neighbor’s mower is a classic example of how I would do anything to get out of mowing lawns.

I guess what they say is true: you never understand your family. But I know this: as soon as I moved away to college, they bought a ride-on mower.

| MaxBarry.com › Max › I Was a Teenage Lawn Mower