I’ve been contacting all my friends with babies, pumping them for information on whether those three-wheeler strollers are really all they’re cracked up to be, and do you want a bassinet that also converts into a car seat or is it fine to have those things separate, and surely, surely, when the baby book says they go to the toilet 10 times a day, that has to be some kind of misprint, right?

Thanks so much for all the congratulations and well wishes! You guys rock.

She’s having a baby 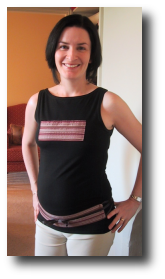 Now, I know other people have had babies. I see them all the time. In fact, I have it on good authority that, at one time, I was a baby myself. So on the one hand, surely there should be nothing newsworthy about the impending arrival of yet another one. But on the other, OH MY GOD MY WIFE IS PREGNANT.

I know, I know. Deep breaths. Work through it. Okay. Here are the facts: The due date is August 22. We know the baby’s sex (my theory is the birth will be interesting enough without needing to build up any additional suspense), but are not telling anybody (because we’re cruel). It’s our first.

Whoa! That blog about my newest arch-nemesis (why stop at one?), Todd Bunker, got quite a reaction. First a lot of people left comments supporting me, which was really nice and quite touching. I did notice a few said some pretty mean things about Todd… but no, you’re right, he deserved it. Then I saw a bunch of people had stampeded onto the site that hosted Todd’s article to rake him over the coals. And some copied me in on e-mails to Todd, pointing out (in some detail) glaring deficiencies in his character.

Now, I had been thinking about writing a blog about The Worst Review I Ever Got—one that makes Todd Bunker’s seem like drooling praise—but now I’m worried that if I do, people will hunt the guy down, smash his car windows, and kidnap his pets.

So, moving on. For a while there I had a metablog: in late March, a guy called Adam left the comment:

Max Barry has inspired me to start my own blog, and since I don’t have a website, I will start writing on the comments of max barry’s blogs. It will pobably be really boring and have a lot of grammatical errors because I am not a professional writer.

But it wasn’t! I was enthralled with whether Adam would ask Jennifer to the prom, and what would happen to his simmering rivalry with Eric, even if this was all clearly fictional. And damn, he made some good points: why isn’t 2% milk called 98% milk? Unfortunately, Adam seemed to lose enthusiasm in April, and then he stopped posting. So my metablog is no more: I’m back to just a regular blog.

Speaking of comments: a couple of people asked about the apparently redundant “A Novel” that appears on the cover of Company. Well, here’s the answer, straight from my editor:

That’s so bookstore clerks don’t throw the book in with WHO MOVED MY CHEESE?

So there you go. Apparently Doubleday is also debating how exactly to “glaze” the donut on the cover! Although:

the scratch n sniff idea was deemed too expensive

Oh well. You can probably get the same effect by purchasing a real donut and smearing it all over the book. If you really want to, I mean.

Today I got some orthotic inserts for my sneakers, because I’d like to be able to keep running without having my feet collapse, or my knees implode, or whatever else is meant to happen to long-time runners. My podiatrist was an energetic young woman named Allison, and pretty soon she had my feet wrapped up in warm, wet bandages—which was really pleasant, although it was hard to relax due to the threat of tickling. Apparently Allison was making a mold, from which a plaster cast of my feet could be formed, and used to shape the orthotics.

“What happens to the casts afterward?” I asked.

“Oh, we keep them,” Allison said. “We have to. They’re considered medical records.”

I found the idea of a big warehouse somewhere full of white plaster feet a bit disconcerting. But Allison was enthusiastic. She was, in fact, remarkably perky for someone who had to smell other people’s feet all day. I quizzed her about this: “Don’t you get sick of dealing with feet all the time?”

“Oh no,” Allison said, as if I had said something deeply shocking. “Two people walk in, and they’ll be totally different. With feet, you never know what you’re going to get.”