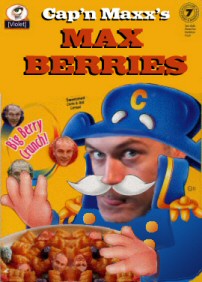 People often call me Max Berry by mistake. At first I thought it was because of my Aussie accent, since whenever I visited the US I had encounters like this:

Max (checking into hotel): “The surname is Barry.”

I swear, it really happened.

After that I tried laying on a thick American accent whenever I pronounced my surname, but I just got strange looks, especially outside the States.

I get called Berry in print too, though, so that can’t be it. I wouldn’t mind so much except I went to high school with a kid named Scott Berryman who moved in on a girl I was deeply in lust with, so he was my arch-nemesis for, you know, about three weeks around the end of 1987. Every time that damn Berry name comes up, I get flashbacks of Scott and Tracy sitting under a tree together, holding hands. Damn you, Berryman!

Still, even I can appreciate this pic, which a mysterious person called RaptorRed whipped up on the NationStates forum. Now that’s funny! I especially like the little heads floating in the bowl.