Bedford, England, is a place to make you believe in God, but only if He is very angry. Gazing across the panorama of desolate streets, dead, claw-like trees, and a sluggish black river that smells of sulphur, you can’t help but think, “Yep, somehow, sometime, someone here really pissed God off.”

Don’t get me wrong; most of rural England is quite picturesque. Even in mid-winter, there are charming little villages. You can even spot the odd animal frolicking in fields, but as you approach Bedford, they look increasingly frightened. Then you arrive. At first, you might think there’s nothing wrong; any town could look like this, if the garbage collectors went on strike for a while. You have an odd, clenched feeling your gut, but that could be a bad hamburger. Bad hamburgers feel like they’re slowly sucking the marrow out of your bones, right? Sure.

It’s only when you’ve been here a while that the true horror of Bedford reveals itself: it’s unrelenting. You think, “All right, so people here look like extras from Dawn of the Dead, but that’s just because they choose not to care about personal grooming for some reason.” (I developed this theory after spotting a guy who looked like Kevin Spacey, if Kevin was drunk and out of shape and didn’t own a hairbrush.) Then you pass a guy afflicted by a plague of boils, and realize: No. It’s not a choice. It’s biblical.

I wrote about Bedford last time we visited, and since then it has managed to get worse. I didn’t think that was possible. I mean, once the entire town is made up of people either begging for money or actively stealing it, what’s left? Once the wail of emergency vehicle sirens is constant, do you really notice any more of them? But then I ran alongside the river Ouse, past what at first I thought was a rubbish dump but turned out to just be someone’s back yard, and a goose tried to mug me. I think it had a switchblade.

So it’s almost 2008. I’m very much looking forward to ‘08, because, writing-wise, 2007 blew. It started off well. It’s just that it then took a sharp turn into soul-destroying, heart-breaking stultification. I think this must be what happens when you start the year with a blog that says, “Man, I’ve got this writing thing nailed.” So: okay. Lesson learned, ha ha!

Yep, I’m feeling much better about 2008. I won’t have a book published, or a movie released. But I will write.

And, with luck, I will get out of Bedford without being stabbed.

It’s good to have goals.

Thank you for following along my web site, and reading my stuff, and caring, even if only a little. It means an enormous amount to me. Sorry for the hold-up, but give me a little time and I’ll have some books that are worthy of you.

New Fiction: How I Met My Daughter 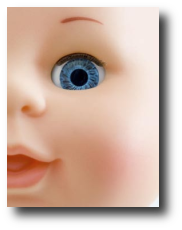 I wrote another short story! I know, it’s crazy. It’s like I’m just pumping these things out. Anyway, it’s in stores now in Australia as part of The Bulletin’s Summer Reading Edition, in a super-cool layout complete with creepy doll’s head pic. I tell you, there’s something about a creepy doll’s head pic that just works with my writing, you know? Maybe I can get them to print some in my next novel.

If you’re not in Australia, this would be the time when you start to get annoyed. I mean, Australia was already pretty ace, but now it’s also got new Max Barry short stories with creepy doll’s head pics? That’s just too much. But I say would, because The Bulletin said I can post their spread here for your online enjoyment. Which is damn cool of them. So here it is:

How I Met My Daughter: pretty PDF version (120KB), layout and images copyright The Bulletin, or plain web version.

This story is quite different to my usual groove, and I’m interested in what you think—whether you prefer this or Springtide, for example.

| MaxBarry.com › Writing › New Fiction: How I Met My Daughter

I knew I was in Los Angeles when I saw the crazy guy on the sidewalk corner, screaming abuse at a security guard. I mean, the 14-hour flight was a tip-off. You don’t go through that and not notice. And US Customs was as cheery and welcoming as always. (“Your daughter… we want her fingerprints.”) But nothing says LA like a 50-year-old guy with thinning hair shrieking, “I hope you feel good about yourself! I hope you feel like you’ve really achieved something here!”

See, he wasn’t actually crazy. In most other parts of the world, somebody completely losing it in public means they have a serious mental illness. But I think this guy was just annoyed. He even looked a bit like Larry David. Yes, I was in LA.

People here are very friendly. Of course, I’m comparing it to the only other American city in which I’ve spent serious time, New York, so I would probably be impressed by anything other than open hostility. And I am in Santa Monica, which is one of the nicer parts of LA. But there is a good feeling. On the road, people give me plenty of room. Maybe this is because I’m not used to driving on the right side and tend to veer over to the left when not concentrating. But I like to think it’s politeness.

I’m here with Jen and Fin because we’re going to England, and it’s on the way. When you’re traveling from Melbourne to London, anywhere is on the way. It’s one of the properties of flying halfway around the world. We’re spending most of the next two months with Jen’s family in Bedford, the mucous membranes of England, and there are some movie things happening (in a possibly-kinda-let’s-see way), so here I am.

The first thing I did upon arrival was pick up a throat infection. Actually, I might have done that on the plane. Either way, it’s been a snotty few days. Now for the big question: Disneyland or Sea World?

P.S. US Customs doesn’t actually fingerprint children upon entry. I just said that because it feels like they might. I asked the Customs guy how old you had to be before they started fingerprinting you, and he said 13. So there you go: the United States is woefully unprepared for attacks from 12-year-olds. I hope you can sleep at night.