I’d love to be a published author, but I never seem to finish any of my stories. I write about 20-60 pages and then just kinda let the story die, and it is not for lack of trying…I really would love to finish a story, but I feel my life gets in the way. Where do you get the energy, drive, and determination to write a full length novel?

I avoid handing out writing advice on this site, because it’s hard to do without sounding like the world’s biggest blowhard. But I get this question so often that I’m going to blow anyway. (Forgive me.)

Disclaimer: I don’t think there’s any advice that’s going to work for all writers. Everyone does this thing differently; you need to find what works for you. Don’t devoutly follow any rule about writing… except this one. And the one about always relocating a few copies of my book to the front displays any time you’re in a bookstore. Yeah. Just those two.

I guess the first thing to realize if you’re stuck a few chapters into a novel is that this happens a lot. It doesn’t mean you’re untalented or undisciplined or not cut out to be a writer. I started a novel in high school that I thought was brilliant in Chapter 1, okay by Chapter 4, and after that didn’t want to think about. It died a slow, lingering death on my hard drive, but because I knew it was there, waiting for me, I didn’t want to write at all. It was a couple more years before I resolved to leave it behind and start something new: that one clicked for me in a way the other never had, and I finished it.

So the important thing is not to let this one problem derail you from writing. Maybe you can fix this story and maybe you can’t; either way, you have to keep writing.

I think there are three reasons you can lose enthusiasm for a novel. Let’s start with the ugly one: it was a weak idea to begin with. Maybe your premise isn’t well-suited to a novel; maybe it’s better as a short story or screenplay. Maybe it needs another key idea or two to fill out the concept. Or maybe you just thought this was going to be better than it turned out. In any of these cases, it often won’t help to blindly forge ahead and hope everything gets better. So let the novel sit for a while. Start writing something else. It doesn’t matter what. You might end up coming back to this novel with new ideas and a ton of motivation, but if you don’t, let it be because you’ve moved on to something better.

The second possibility is that your story has good fundamentals but you took a wrong turn. This can happen any time, but is more unsettling at the start because you have less confidence. A trick I use when suddenly I go from powering along to a dead halt is to delete the last sentence. Even if I think there’s nothing wrong with it: backspace backspace backspace. For some reason, this almost always immediately presents me with an idea for a new way forward. Sometimes I have to delete a paragraph or two, or (very rarely) even a whole chapter. I don’t know why the physical act of cutting part of the story away helps—I should be smart enough to work this out by just thinking about it, shouldn’t I? But apparently I’m not, and it does.

(I don’t plan my novels out in advance. If you do, this technique is less likely to help you. I hate planning novels; I think they’re much more fun to write when they evolve on their own. I tried planning a novel once and it was dull, dull, dull. (No, it wasn’t one of my published ones. Shut up, you.))

The third possibility is you’re being too hard on yourself. For a lot of writers, getting critical too early—and “too early” here probably means “before you’ve finished the first draft”, or at least 30,000 words—is a quick and effective way to kill your motivation. I’m lucky on this score, because I am blessed with a kind of split author personality: I have the writer guy and the editor. The writer guy is totally deluded about his own ability: he thinks everything he writes is breathtakingly brilliant. Which is very handy, because when I think I’m working on God’s gift to the 21st Century, it’s easy to stay motivated. But unless I snap out of that at some point, all I have is a first draft, and that’s not nearly good enough. This is when my editor personality comes in. He thinks everything I write is the purest horse crap. He can’t believe that I would consider inflicting such a grotesque parody of literature on live human beings. So he makes me rewrite, and rewrite, and rewrite.

Getting those roles mixed up is a disaster. You don’t want a dose of cold, hard reality while you’re writing. No, no: delusion is your friend. Embrace the delusion. Save the critical analysis for later. 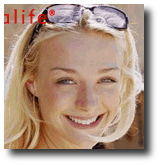 Here’s something to try: spend the next day actually noticing every ad that features a photo of someone looking at you. Magazine ads, bus station posters, billboards: all these. Now think about what kind of situation you’d have to be in for this person to be looking at you like that in real life.

If where you live is anything like where I live, you’ll find that for a very high number of these, the situation would have to be one of:

This is an entertaining exercise not just because it’s amusing to think about Kate Moss wanting your body, but also because it reminds you how far the arms race between advertising agencies and your brain’s perceptual filters has advanced. The more ads there are, and the more they try to get our attention, the better we get at not noticing them, so marketers have to continually up the ante. Apparently we’re now in a state where most ads are full of people looking at us in a way that would heat us up down to our toes if it happened in real life, and we don’t think anything of it.

| MaxBarry.com › What Max Reckons › They Want You

Now for an elephant stamp

(Wow, she’s an effective little time sucker. Sometime soon I am going to have to get my life back.)

First reviews! Two are in for Company ahead of the January ‘06 release, and they’re pretty great. Kirkus Reviews gives me a starred review, which means they think the novel is “of unusual merit,” which I’m assuming is a good thing. They didn’t star up Syrup or Jennifer Government, so this is my first one, and, clearly, a sign that certain dunderheads in the editorial department have been fired. Kirkus says:

I always wanted to eviscerate something. But, perhaps oddly, even more important to me than these is an e-mail I got from a long-time reader who somehow managed to get his hands on an advanced copy. Jason says:

Just wanted to drop you a line and say that I just finished reading Company. I gotta say that at first, I was afraid you’d lost it. The spark that was there in Syrup and Jennifer Government wasn’t there for me, but then, out of nowhere, you did it again. I read the book over three days (only because I had to sleep at some point). You were right, the plot isn’t there from the beginning, and I think that’s what got me at the beginning. In the other two, there was a hook, in this one, if you wanted to know it you have to wait. Anyway, bravo. I loved it.

It means a lot to me that I delivered for this guy. Reviews are important, and will do a lot to determine what sort of career I have, but they’re written by people who read me as part of their job. The people I want to impress are the ones who found me on their own, and saw a connection. When someone thinks, “I liked his last book, I’ll hope this new one is good” and shells out their hard-earned, I fervently want that person to be thrilled.