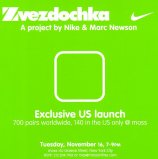 As previously mentioned, occasionally some wacky marketing stunt I dreamed up for one of my novels comes true. Films as advertisements, logo tattoos, naming people after corporations; no matter how outrageous I try to be, real-world marketers are scampering along right behind.

But this is something else. First, a few lines from Chapter 1 of Jennifer Government:

The Johns smiled. “We started selling [Nike] Mercurys six months ago. You know how many pairs we’ve shifted since then?”

Hack shook his head. They cost thousands of dollars a pair, but that wouldn’t stop people from buying them. They were the hottest sneakers in the world. “A million?”

“John here,” the other John said, “pioneered the concept of marketing by refusing to sell any products. It drives the market insane.”

This green thing is an invitation to the launch of a new range of Nike shoes that has gotten coolhunters drooling down their buttoned silk shirts. And what’s that down the bottom?

The next step, in Jennifer Government, is to throw open the warehouse doors and try to shift as many pairs as possible before the aura of exclusivity wears off. Also to shoot a few customers to make it look as if demand for the shoes is so hot that people are killing each other for them. If that turns out to be Nike’s plan in real life, too, I’m putting in a call for commission.

5 comments | MaxBarry.com › Jennifer Government › Who do I sue?

The other day some money inexplicably appeared in my bank account. This intrigued me. I wanted to know more, like: Who put it there? And: Could they send more? It turned out it was from my agent, Luke. “Oh, that’s royalties,” he said. “Jennifer Government earned out the advance.”

Authors earn money in two ways: royalties and advances. Royalties are the cut the author receives from the sale of each book (usually around 10% of the cover price, but can be much higher or lower depending on the edition, country, and how much more famous they are than me). An advance is a payment made to the author before the book goes on sale. It can take a year or more for a book to hit the shelves after a publisher has accepted it, and months or years to sell significant numbers of copies, and six months on top of that for it to show up in a royalty statement with a check attached. So if there were no advances, authors would turn up to bookstore readings with their possessions in a shopping cart. Because this would be embarrassing for all concerned, the publisher makes a kind of bet: they guess how many copies they’ll sell, and pay the author the equivalent of a year or two’s royalties. The author doesn’t earn anything else until actual royalties exceed the advance.

You don’t have to pay back an advance even if the publisher over-estimates, which is fortunate because otherwise I’d be washing dishes in the Penguin Putnam cafeteria. They expected to sell more copies of Syrup than they did, so my royalties have never earned out the advance. On the one hand, this makes me one lucky asshole, because I got overpaid. On the other, it’s largely the reason why Penguin dumped me from their list, so I think it mostly works out.

Anyway, the point is this is the first time I have earned actual royalties. I’m so excited about it. I feel as if I am a real author, not just a guy with an attack-dog literary agent. I’m making a living from telling stories!