Join | Login
this space for rent

After the First Draft 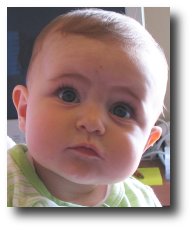 In the grand tradition of posting news about myself that chuckpalahniuk.net reported first: I’ve written an essay. Webmaster Dennis Widmyer is putting together a great resource for writers called… uh… The Writer’s Resource, and asked if I’d contribute something. So I wrote this piece about rewriting. If you’re a writer, you might find it interesting.

If you’re not, well… isn’t this picture of Fin cute?

I sleep in later than I mean to and have to shower, dress, and pack so fast that I barely have enough time to steal a hotel pen. I’m meeting my friend Charles for breakfast, and we decide to use the hotel restaurant. This turns out to be a mistake, as Charles manages to order the world’s most expensive bagel, a whopping $18 because along with the juice and coffee it qualifies as a “continental breakfast.”

Our plan is to walk to the Museum of Natural History, but it’s such an extraordinarily sunny day that instead we end up just chatting on a bench in Central Park. During this time I watch a lot of parents with prams go by, and enjoy peering at their babies until I see one with beady little eyes and a hairy face. It’s a miniature poodle. Yes. In a pram.

That afternoon I have lunch with my impossibly cool agent, Luke, in the kind of restaurant where ladies come to complain to each other about their nannies. (Seriously. I hear them.) I also meet Luke’s dad, legendary agent Mort Janklow. This is a little nerve-wracking, because if the stories I’ve heard are true, when Mort enters the room editors fall to the ground and cry. But he seems quite normal; friendly, even. I guess that’s how it works: the killer is never the one you expect.

I catch a ride out to JFK where I stand in the check-in line behind a Hasidic Jew and a blonde woman dressed as a cowgirl. I feel as if the Universe is trying to tell me something, but I’m too stupid to understand the message.

It’s a little over six hours in the air to L.A., then I have a couple hours on the ground before the 16-hour flight to Melbourne. The most interesting thing about this is that we cross the International Date Line at around midnight, so I miss Friday entirely. When it’s my time to die, I want that day back.

This makes it Saturday when we touch down in Melbourne. I’ve taken no more than ten steps off the plane when I hear someone saying, “Yeah, they’d make Riewoldt captain in a second anywhere else.” They’re talking about Aussie Rules Football. Ahhh. It’s good to be home.

I find myself walking quickly toward the baggage carousel—not just places-to-be quick, but drug-mule-freaking-out quick, and force myself to slow down. Of course, I know the odds are pretty high that (a) despite our plan, Jen and Fin might not have made it to their airport in time, and if they have, Fin may be (b) asleep, (c) in a bad mood, or (d) cry when she sees this smelly, unshaven man shuffling toward her. But I can’t help being so excited about seeing them again that I have to use the bathroom. In retrospect, I’m a little surprised I wasn’t stopped by customs agents and internally searched.

Then I stand by the baggage carousel for an hour. It’s not just me: the whole planeload of passengers waits and waits. Crappy Australian baggage handlers! I just know they’re outside having a smoke break or reading their union pamphlet on workers’ rights or something equally insignificant. Actually, bags are coming down the conveyor belt, it’s just that there are about a thousand people waiting for them. It seems that a lot of planes have arrived at the same time.

I am seriously considering just leaving the terminal and worrying about how to get my bag later when finally—finally!—it appears. I collect it and, one security check later, am permitted to pass through the sliding doors into the main terminal. There is a huge horde of people waiting outside and I have no idea how I’m going to find Jen and Fin among them. Then I hear, “Max!” I turn and there they are, three-deep in the crowd: my beautiful wife Jen and Finlay in a sling on her chest. And then the most incredible thing happens, something I could never, ever put in a story because it is too far-fetched to be true: despite all these people and all this noise, Fin looks directly at me and gives me a big, gummy smile.

It’s a choice between sleep and breakfast, and I go with sleep. I’m sorry for writing about sleep so much; it’s just that it has become very important to me. I have realized that if I don’t sleep, I don’t do the things I need to on this tour well—things like talking to people. So a lot of my time is spent considering when I will sleep, and where, and for how long.

I’m met at my hotel by Rachel, who is my publicist at Doubleday. Rachel has been working for months at getting me reviewed, interviewed, and hosted all over the country: basically she organizes everything, then I just turn up and take all the glory. She is terrific, and great company as we are driven around Manhattan in one of those tinted-window town cars. (It’s all tinted-window town cars here; that and cabs and stretch limos.) I ask her why there was no Chicago stop on this tour (which people keep asking me about), and she tells me it’s because everyone at Doubleday hates Chicago. Okay, no, not really. It’s actually something to do with the difficulty of booking enough media to justify the stopover. Which I think is fair enough, given the publisher is paying for all this. But I do let her know that if I don’t get any Midwest stopovers on my next tour, people may hurt me.

First stop is WNYC radio. I’ve done enough radio interviews on this tour to be quite comfortable about it, but here the corridor I have to walk down to reach the sound booth is lined with posters of various celebrities with the tag line, “I’m a listener.” I suddenly find myself confronted with the unnerving image of Sarah Jessica Parker reclining at home with the radio on, thinking, “Who is this Australian jerk?”

Despite that distraction, the interview goes well and then it’s off for a round of bookstore drop-ins. These are becoming defined for me by the big titles currently out, especially Stephen King’s Cell, which is front and center in practically every store I’ve visited. I hope that one day some struggling midlist writer on book tour looks at enormous piles of my books and thinks enviously, “That damn Max Barry! His new book is everywhere.”

One of the bookstores I visit is St. Mark’s, which I realize is the first store in which I ever saw a copy of my own book. Let me tell you, this is one of the most magical moments of becoming a published author. I’ll never forget seeing Syrup sitting on the shelves, as if it was a real book. Of course, if St. Mark’s held true to the general trend, they probably never sold that copy. It was probably returned to the publisher and pulped. But still. Magical, I tell you.

Next is a Barnes & Noble, and it’s memory lane again because it’s across from a park where I once played with some squirrels. I know, I know: to Americans—or, indeed, to residents of any country where there are squirrels—they are nasty little disease bags. But I think they’re wonderful. I love the way they spring from place to place. I could watch that for hours. In fact, I have, and taken photos.

When I swipe my hotel card to get back into my room, it flashes red at me. I go back to the lobby and get a new card, and, when this produces no change, get security up to fix it. The security guy tries the card, and it flashes red… and he turns the handle, and it opens. Oh. I just assumed that red meant no go. Because this is a nice hotel, the security guy says carefully, “I guess it must have started working again.”

I catch a cab to my reading and realize why there is so much honking of car horns in New York: it’s all because of this one cabbie. He drives with one hand resting on the horn, tooting everyone, even if they’re not doing anything special. He pre-emptively toots people he thinks might be considering something. And if someone dares to toot back, he goes nuts, firing off loud volleys of counter-toots.

My reading is at Rocky Sullivan’s, a pub, and it’s a full room even when I arrive. Before we start, I decide to go around and hand out the publisher-provided donuts, and I can see some people trying to figure out if I am really me. Some clearly assume I’m not, but rather just some wacko handing out donuts, then get embarrassed when they find out.

It’s a very fun reading, and knowing it’s my last one makes it a little poignant, too. I manage to read the sentence “Elizabeth’s throat thickens” without messing up for the first time on tour. At last! It’s a little victory.

Then, all of a sudden, it’s over. I catch the subway back to my hotel, get a little lost, and now here I am. As much as I’m looking forward to getting home, I’m also kind of sad this is over. When I had the idea to do this travel diary, I honestly thought I’d be writing about the completely unglamorous job of trekking from city to city, visiting uninterested bookstores, and hoping desperately for more than five people to turn up to a reading. Instead it has been wildly more successful than I imagined. I can still hardly believe how rock star the whole thing has become.

Thanks so much to everyone who turned out in L.A., Mountain View, Seattle, Portland, and New York. You made this tour unforgettable for me.