Revenge of the Rats 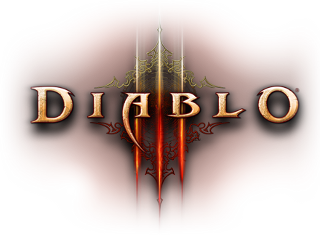 In 1957, a psychologist named B. F. Skinner decided to see what happened when you put a rat in a cage with a lever that made food come out. He discovered that if the food came out whenever the lever was pushed, the rat would settle into a healthy work-life balance of pushing levers and running hamster wheels. But if the lever only delivered food sometimes—if it randomly might or might not—the rat would work that lever like there was no tomorrow.

This research underpinned much development of poker machines and gaming. Now Diablo III reveals what happens when the rats have internet access: they bitch about drop rates.

The Diablo series of games are simple: you run through dungeons, hit monsters, and collect the items that fall out. Usually the items are crappy, but sometimes, randomly, they’re awesome, and allow you to fight even more powerful monsters, which can randomly drop even more awesome items. The game ends when you starve to death in your apartment surrounded by empty soda cans.

Actually, that’s not true: there is an end-game. Your character can’t progress beyond level 60 and there’s a hard maximum to the potential quality of items. So there is a diminishing returns thing: early in the game, you find better items often, but as your equipment approaches the theoretical maximum, your odds of finding something better become decreasingly smaller. 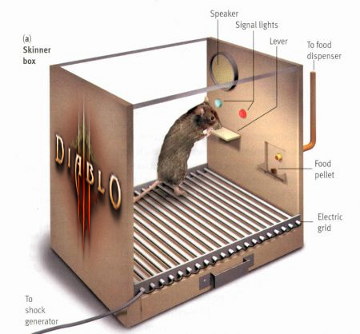 Diablo III had a few problems when it launched, and there was much bitching on internet forums. A great deal of the bitching was about drop rates; that is, how likely food was to arrive when you pressed the lever. Players thought drop rates were too low, if you were wondering. They wanted food to come out more regularly. A very popular proposal, one mentioned in almost every discussion, no matter how relevant, was that more situations should deliver “a guaranteed rare,” a “rare” being a high-quality item. That is, instead of food only coming out sometimes when you pushed the lever, it would come out every time.

This feedback around drop rates was offered to the developers in the form of an unholy maelstrom of teenage-grade internet fury that raged for many weeks. Players railed against the bitterness of a life of inadequate drop rates, expressing their incomprehension that such stupidity should exist and turning viciously against their former idol, game designer Jay Wilson, who was now revealed not as a benevolent provider of sometimes-food but rather the very face of evil, Diablo himself, as it were, He Who Made The Lever Not Work Often Enough.

Some of the angst was understandable. Diablo III introduced an in-game Auction House, which meant that instead of throwing your old items away as you found new ones, you could sell them to other players for gold. The marketplace being virtual and therefore operating with a degree of efficiency rarely seen in the real world, it was soon a lot easier to find good items on the Auction House than to go around hitting monsters hoping that one would randomly fall out. This in turn allowed players to obtain items approaching the hard maximum quite quickly after starting the game, and rendering their chances of thereafter seeing anything better randomly drop from a monster close to zero.

After sufficient buffeting, the developers decided to increase drop rates. They also created more “guaranteed rare” situations. This was very warmly received by the community. It wasn’t enough, though, and since then drop rates have been raised again, and “legendary” items radically overhauled to make them much better, i.e. more like food. At the same time, a new reward system was introduced called “Paragon Levels,” which periodically deliver such an enormous explosion of congratulation to the player that it almost feels sarcastic. This has quieted community angst, although at this point it’s hard to tell how many of them are left. I suspect a lot have stopped pushing the lever.

The interesting part about the rats who like to gamble is that they don’t do it for food. They don’t press the lever only as many times as required to deliver the same amount of food as when food delivery is guaranteed: they press it more often and more rapidly. They like to see if they can win. Although “like” could be the wrong word; it may be more accurate to say that the uncertainty creates stress, which they feel the need to resolve. I would imagine there are some pretty pissed-off rats, when they press the lever a bunch of times and still nothing happens. They would rage on the internet if they could. And they’d be justified, since it wasn’t their choice to get in the cage. Somebody put them there, who knew what would happen.

16 comments | MaxBarry.com › What Max Reckons › Revenge of the Rats