Not Grinning, Not Dying

I think I must look like I’m smiling when I’m actually in a lot of pain. Like today, in the middle of a 15km (9.4mi) run, I’m barely keeping it together, so my face is a rictus of agony, my lips pulled back from my teeth in a skull-like grimace, and people running in the other direction are all, “Hi!” and big smiles and eyebrow jiggles. This has been going on for a while. At first I just assumed runners were naturally friendly. But there’s some surprise in their reactions, so I think I must be grinning at them. They are definitely not picking up my real feeling, i.e. that I am moments away from death. If they were, they’d look a lot more concerned.

My Dad would have turned 70 today. He was some kind of runner. I only began running after he died, so I never appreciated this. Now I realize his 2:45 marathons are practically superhuman. I can maintain that pace for approximately 10 minutes, and that’s while grinning.

I’m working on too many books again. Sorry about that. It’s a fast way to finish none of them. In the meantime, though, I am drowning in foreign editions. I love getting foreign editions. I could never throw one away. So I have shelves of Portuguese Jennifer Governments and French Syrups. And now a Chinese Machine Man! This novel gets the most interesting covers: 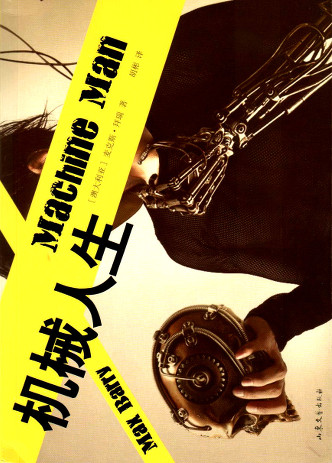 The new Lexicon paperback is still selling well, which is great but doesn’t quite free me from the constant terror of thinking my career could end at any minute. I’ve thought about the reasons behind this feeling, because it’s been there essentially the entire time, and have concluded it’s because when you’re an author, your career really could end at any minute. Each year it doesn’t is like a little miracle. I visit my Dad’s cemetery on his birthday, just to say hello and talk about the last year, so that’s what I’m going to tell him today: when I run, it looks like I’m smiling, and holy hell he was fast, and this last year, it has been another miracle.