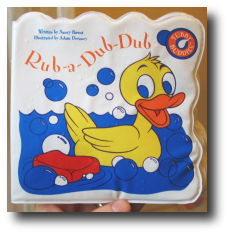 [Previously in this series: Sealed With a Kiss (Mary-Kate and Ashley #20).]

Join the Tubby Buddies for oodles of bath time fun! promised the blurb, and that sounded like a good idea to me. So we gave it a road test: Jen (in bath) narrating, Fin (also in bath) staring at it, grabbing at it, and trying to chew its pages, and me sitting beside the bath and listening with increasing horror.

“Rub-a-Dub-Dub,” it’s titled, by Nancy Parent (yes, really). And the thing is, I wanted to like it. Really. The cover is a little Disney-cute, sure, but it’s got bright colors and clear lines, and that’s probably what the seven-month-old baby demographic demands. Also, the book is made of soft vinyl. Not just the cover: the whole thing. It’s not until you get a vinyl book in your hands that you realize what a brilliant idea this is; indeed, that you begin to wonder why all the world’s great tomes aren’t published like this. You can spill things on it, roll it up, and if you were reading it in bed, bunch it up and use it as a pillow.

Fin certainly made an effort to digest the story early, which Jen was required to arrest so she could begin reading. It’s quite short, so let me take you through it line by line:

Rub-a-dub-dub!
There’s a duck in my tub.

This is where I started to get uneasy. It’s a two page spread, one line per page, and the first illustration is exactly the same as the cover with two exceptions: first, the duck’s eyes are looking in a different direction, and second, instead of being in a soapy bath, it appears to have drifted out into the open seas. I mean, there are foaming waves and everything. Which would be an interesting plot twist, only it’s contradicted by the text, which makes it clear this is still meant to be a tub. And that text! Apparently this wasn’t a clever post-modern homage to the classic “Rub-a-dub dub, three men in a tub” at all; it was just a rip-off. Once again, I thought I caught the stench of Disney.

The facing illustration depicts a smiling tug boat, who is looking at the duck. Or rather, he’s looking a little below the duck: their sight lines don’t quite match up. But I was prepared to let this go, since technically they’re in two separate illustrations. I presumed that Mr. Boat was the story’s protagonist, since there didn’t seem to be anyone else around to be remarking on the presence of ducks in his tub, but on this I was to be disappointed.

Now I started to get confused. The illustration shows the duck meeting a very happy fish. There’s no sign of Mr. Boat, but I guess he must be off-page somewhere, still narrating. Because otherwise this giant bath must contain some shadowy third party we haven’t yet met, and that’s a bit scary.

I wasn’t thrilled with “Splish-splash-splish”—that struck me as something Nancy made up in a hurry to rhyme with “fish.” And the characters still seem to be navigating the oceans, rather than a bath. On top of that, even though this is a single illustration, the duck’s and fish’s eyes don’t line up, which gave me a headache the more I looked at it.

Quack-a-doodle-do!
I love a bath, don’t you?

I’m sorry—what? What? Is this some kind of duck-rooster hybrid? Quack-a-WHAT? I was stunned. I’ve heard some strained rhymes in my time, but this is clearly the worst. The only possible excuse for something that excruciating is that Nancy is stuck in a cubicle somewhere, forced to churn out about forty of these books a week. (Later, I did an Amazon.com author search for “Nancy Parent” and got 342 results. So I guess she is. But still. Hang your head, Nancy.)

That terrible line concluded the book. I was annoyed by the unresolved mystery of whose tub this was in the first place, given that the duck itself appeared to be delivering the final stanza—he’s even looking directly at us—so this is either a brutal point-of-view change, or earlier the duck was describing himself in the third person. Either way, my head hurts.

But as sickened as I was, the target audience seemed impressed. Fin’s reaction seemed to be: “A terrific book. I couldn’t get enough of it (into my mouth).”

You know when you mean to call a friend, but you don’t get around to it for a while, and suddenly it’s been so long that you can’t just call up and say, “Hi! Anything happening?” You need to have something worth saying; something that justifies you finally ending the absence. You can’t just call up and blog about any old thing; you should blog about something significant, so the friend thinks, “Huh, well, I may have had to wait for a while, but at least that blog was worth it.”

Sorry about that. What I’ve been doing instead of blogging: mainly, beavering away on my science-fiction TV series proposal. (Which is so cool; I mean, it’s got mentally deranged artificial intelligences and chicks with weird names and everything.) Now that’s done with—for the moment; nothing I write is ever really done with, I have discovered—I sit back and wait for my agent to call up and tell me that the Sci-Fi channel wants 26 episodes and they’re already building the sets and did I want the characters to have really big guns, or ridiculously big guns? That’s basically it.

But that’s beside the point. The point is that I’ve broken the ice; we’re talking again, and now it won’t seem so weird if I blog about, say, a children’s book about a duck that made me very angry. Or at least, no weirder than you’re used to. Right? Okay. We have a deal. So… how have you been? Anything happening? 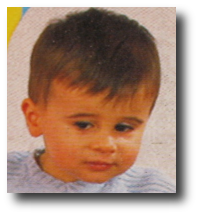 I have bought a lot of baby stuff. And I’ve noticed that many of the babies on the packaging don’t look exactly picture-perfect. Which is understandable, since babies probably aren’t very co-operative on photo shoots. But still, you’d expect the photographer to keep trying until they got one where the kid looked as if he was enjoying himself, wouldn’t you?

The makers of the Dohome inflatable play house clearly thought not. On the side of the box is this picture in which one child is, at best, listless, and the other is obviously thinking, “What a load of crap this thing is.” But even better is the huge picture on the box’s front. Check out this baby and tell me if that’s a child in the throes of joy and excitement. That kid wants out.

I just wish I could see the pictures they rejected.