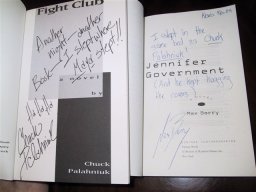 So this is about six months too late and I actually got scooped, by myself, on chuckpalahniuk.net, but: I was on book tour in the US earlier this year, and this meant staying in a lot of fancy hotels. In Seattle it was the Alexis, which is apparently frequented by authors so, uh, frequently, that it has a special room for them: the “Author’s Suite.” This, I assumed, was a dingy sub-basement hole where people could yell down things like, “Max, don’t forget to do the washing,”* but no: it was swish as. The hotel asked (oh, how politely they asked) every visiting author to sign a copy of their novel, and the walls of the Author’s Suite were fairly groaning with these. I had lots of fun hunting down copies of some of my favorite books, and was especially happy to find a Fight Club. Chuck Palahniuk is one of my top two modern authors (the other is Neal Stephenson); I don’t see much resemblance between Chuck’s stuff and mine, but am very happy whenever someone else does. By the time I left, this is what the Author’s Suite copies of Fight Club and Jennifer Government looked like.

* (I actually wrote that and thought, “Crap, I have a load of washing in the machine.” I had to go and get it out before I could finish the blog. Yes, my life is that glamorous.)

I’m grateful and completely humbled by the response to my last post. The overwhelming kindness I’ve received from so many people has made an awful time much more bearable. I’m truly touched and amazed. Thank you.

Dad’s funeral is on Tuesday. It will be a simple, private service, as he wanted. Those who were close to him will help each other deal with the shock of his death, and, more importantly, celebrate his life. I’m thinking of telling a story about Dad’s running. He was a mad keen runner for the last 20 years of his life, even completing a bagful of marathons. But the memory that sticks in my mind is when he competed in a fun run around what I think was a national park. I was about ten, and course the most important thing in the world at that age is that your Dad is better than all the other Dads. So I loitered around the finish line with a certain trepidation. And then, bursting out of the trees—there he was! Pounding toward us, scattered applause breaking out, he crossed first… and kept running. He’d decided the course was too short, and he went around again.

To me, this was the most heroic thing that had happened in the world ever.

I was enormously lucky to have this man as my father, and on Tuesday I will give thanks for that.