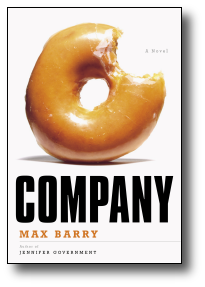 This morning Doubleday shocked the hell out of me by sending me the book cover for Company. I didn’t even know they’d started work on it, which was crafty of them. If I had, I would have been all over them, raising concerns and highlighting issues. Because I’m helpful like that. Instead: bang! Here it is.

And I like it! The majority of novel covers, in my humble opinion, blow like crazy, so I’m hugely relieved to get one that’s clean and cool and kind of intriguing. The design is by Michael Windsor, the same guy who did the Jennifer Government cover, so if you noticed a certain similarity of style, well done you.

Now I know what you’re thinking. “Well, Max, that looks all right, I guess, but… I dunno, what’s the donut for?” To which I am happy to tell you: oh, you’ll find out.

I think what I’m feeling now is relief. I’ve been editing this thing for more than a year, on top of the year it took to write. I actually had the initial idea in 2001, and took at least three stabs at initial chapters in that year and the next. It has been a very long road to here.

I’m relieved that I can think about something else for the next two or three weeks, while I wait for my editor to give me feedback. And I’m relieved at finally being done. But mostly I’m relieved that I think I finally managed to do justice to the idea that’s been bouncing around in my head for the last four years. I’ve always had a lot of faith in the central concept, but I sometimes wondered if the characters were up to the job. I tried all kinds of variations. I threw people out and auditioned alternatives. In the last draft (hello, number eight), the biggest rewrite of them all, I gave the two main characters complete personality overhauls. Brain surgery couldn’t be this messy. I had bits of people everywhere.

But ohhhh, it’s so much better now.

About a month ago Doubleday told me they were pushing Company out to 2006, since I was taking so long on the edits. I cringed. I have been trying to build up the courage to announce this since then. I’m really sorry—I wish this book could come out this year. But I’m really glad it’s not. I hate the old version of Company now. I love my new book.