Fiction For Short Attention Oh Look At That Laughing Dog 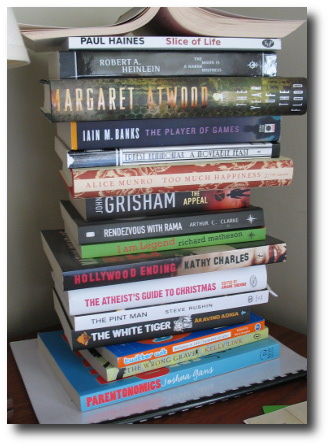 Since I got a iPhone, my bedside table has turned into a tower of books. It was always pretty bad. But now it’s worse. Look at that. It’s a fire hazard. One day I’ll toss a cigarette in there and it’ll be a conflagration. Not that I smoke. That’s the only thing saving my life.

The problem is when I go to bed, instead of picking up a book, I think, “I’ll just check Reddit.” Or Twitter. Or the news. Or Facebook. Or my email. Not or. And. I check all those things. I have 65 apps. I just counted. Halfway, I thought, “I wonder if there’s an app for counting your apps.” I was tempted to take 20 minutes and hunt one down, so I wouldn’t have to waste ten seconds the next time I need this information. You see what’s going on here. It’s a sickness.

It’s got me thinking I should do more short attention span fiction. Maybe another serial, like Machine Man. Firstly, because that was fun as hell, in a terrifying kind of way. Secondly, because I’m rewriting it as a novel, and it’s pretty great. I already have the story. Now I get to play around in all the spaces I skipped over because the serial had to go go go. It’s a good system.

But thirdly because maybe no-one has the time to sit down with entire novels any more. Or rather, maybe there is a class of people, to which I belong, that is becoming addicted to bite-sized information delivered by scattershot. I hope there’s a class. I hope it’s not just me.

Not that it has to be one or the other. I’m not saying that once you sign up to Facebook, you abandon Margaret Atwood. Although I have done exactly that. The Year of the Flood is just sitting there. What I mean is that the novel seems to be getting more competition. The novel is very strong, of course; there is no replacing the novel. But the competition is pretty great. The internet is everything in bite-sized pieces. It’s candy-flavored stream of consciousness of whatever you want.

And increasingly the same device will access both. I’m having trouble getting to novels just because an iPhone is in the same vicinity. What happens when my books are actually on my phone? Or in my iPad? When I’m one swipe away from the web, will I still be able to completely sink into a novel? Plenty of times I’ve slogged my way through a book that wasn’t really holding my attention just because it was there, in my hands. I don’t think I’d do that on an iPad. I think I’d tap that bastard into oblivion and answer an email.

So I am interested in fiction that works with the internet, rather than fights it. Something that doesn’t sit there, 400 pages heavy, asking for a seven-hour commitment before I start. That’s the kind of fiction I’d like to read right now. Something that sneaks under my guard and pries me away from memes and status updates. I would like to find that.

My Kid Says the Darndest Things

I have a little parenting problem. I need some advice. The other day I was out walking with Finlay (four years old; I know, I can’t believe it either) and an elderly woman stopped to coo over her. This woman was clearly someone’s grandmother. She was matronly. I’m thinking of the word “battleship.” You know what I’m getting at.

“So cute,” said the grandmother. I said thanks and Fin said nothing and the woman began to move away. Then Fin said, “She’s got big boobs.”

A few days later, out with her mother, Fin remarked about a passer-by: “She has large upper arms.”

Before that, on a train: “Look at that little person.”

We’ve tried to raise her to believe there’s nothing wrong with people who look different. That differences are interesting but not shameful. That seems to be working. It’s working a little too well. What do I do now?

I don’t want to tell her that some people are embarrassed about how they look. That starts with “are” and ends with “should be.” I can see a case for not commenting on people’s weight, because being very over- or under-weight is unhealthy, and we’ve talked about health and eating balanced meals. But I know she’s going to spend her life drowning in messages about body size, and she doesn’t need that yet. Also, it only deals with the “large upper arms” comments, not the “Look at that little person” ones.

My feeling is that while there is nothing wrong with being a three-foot-tall grownup, and it is interesting, they probably don’t want to be singled out for it all the time. But maybe this is my hangup. I wouldn’t be offended if a four-year-old pointed at me and said, “That man has no hair,” but if his mother acted embarrassed and tried to shush him, I would. Because she would be making it into a bad thing. Maybe it’s the same with everything.

But that leaves me, what? Smiling at amputees after my kid points out they have no legs? Saying, “Yes, you’re right,” when she remarks on the size of an obese man’s buttocks? This is a minefield. What do I do?