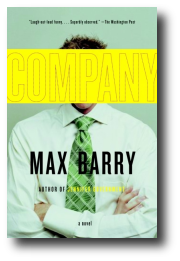 As you know, I’ve spent most of the last two months in Bedford, England. No, you do. I mentioned it, like, just a few weeks ago. See, right here. Well I don’t care if you do get a lot of e-mail; I thought you’d care enough to remember. Well I guess not. Well maybe you should. Fine. No, I said, fine! Don’t take that; that was a present!

Anyway, I am now back home, but before I left, I decided to take a few snaps of Bedford for you. Now, these aren’t of Bedford’s tourist attractions. That’s because Bedford doesn’t have any. Instead I just walked around the block. That was all I needed to capture the real essence of Bedford, I think you’ll agree.

First, this car was parked outside the house. I took this photo because it’s what every car in Bedford looks like. Actually, that’s not true; some have more flags. 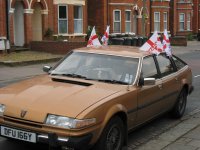 The flags are because of the World Cup, by the way. Just in case you were thinking there must be some really rabid nationalism going on in Bedford. I mean, there could be, but the flags don’t prove it.

A few doors down was a youth social center with high walls and barred windows. I’m not totally sure, but I think this is the kind of center where the youths aren’t actually permitted to leave. This was on the walls: 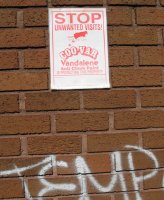 I spent some time trying to work out what “Coo-Var Anti-Climb Paint” actually is. My first guess was that it’s really sticky, so when people try to climb the fence they get stuck halfway up, and dangle there until the police come and hose them off. But I touched the wall and it didn’t seem sticky. It didn’t seem smooth, either, or smelly, or anything else that might discourage climbing. But if I jumped really high I could see a kind of black smear on the top of the wall, so I guessed that was it. And when I touched it, it was sticky. But not that sticky. So I’m still confused about what this product is meant to do.

Around the back of the block, I passed these helpfully labeled bins: 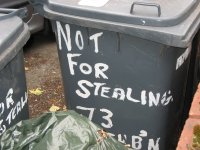 This raised a lot of questions for me. I was tempted to knock on the door and ask the owner a few questions about exactly how he thought this anti-theft protection scheme might work. He seemed to have some insights into the criminal mind that were escaping me. But that probably would have gotten me stabbed, so I didn’t.

Note: After my previous Bedford blog, a friend wrote to tell me that Christopher Reeve used to live in Bedford. This left me confused and bewildered. I kept asking myself: Why? God, why? Then I discovered he lived in Bedford, New York, and the world made sense again.

There are no stupid questions

Dear Max:
I just happened to browse the site as I am with MY Space .Com. Some how I came across your website. One eye catcher is a segment titled: “Women in High Heels Smashing Things” What is that all about? It turns me on. Tell me more of this story and more information on it.

Right! I’m going to assume you’re being funny, Norman, because the alternative is too disturbing. So this is the thing where I look up what people are searching for when they visit this site. It’s been a while since I last checked that, but once again the list is a mix of the bizarre, the terrifying, the unintentionally hilarious, and the unexpectedly profound. Here’s a sample from the last two months:

Some of these are hard to stop thinking about. I’m a little tempted to search for footage of berserk hippos myself now. Is “um” a word? And seriously, I’m in England at the moment: should I be worried about a giant rabbit?

16 comments | MaxBarry.com › Max › There are no stupid questions

This site has a few links to Amazon.com, so people can buy my books online. Amazon is pretty handy because it delivers to almost anywhere in the world, even strange, backward countries where some of my books would otherwise be unavailable, like Britain, or Australia. Amazon also kicks me back about 6.5% on the purchase price, which, if I have worked this out correctly, is actually more than I make in royalties on some editions.

Amazon pays this percentage not just on the items I link to directly, but also anything else a person picks up while they’re there. So if you follow a link to Company and, on impulse, add a pair of Haines Boxer Briefs to your shopping cart—as someone did—I get a percentage of that, too. A percentage of the price, I mean. Not a percentage of the briefs. Because that would be weird.

You see where I’m going with this. Obviously there is some fascination in looking at exactly what people are buying along with their Jennifer Governments and Syrups. (I can’t tell who bought any particular item, of course. I’d need to be a government employee concerned about terrorism to learn that. All I know is that someone did.) It’s fascinating because people buy some really weird things.

Oh, most are logical enough. Serenity DVDs and Chuck Palahniuk novels, for example; I can see why someone who’d been reading my site might want to pick those up. But sometimes… well, see for yourself.

This is what somebody—I feel fairly confident it’s a single person—bought from Amazon via my site recently:

Now you know what to do if a person wearing this approaches you one dark night. That’s right: you say, “Hey, are you a Max Barry fan too?” It could save your life.